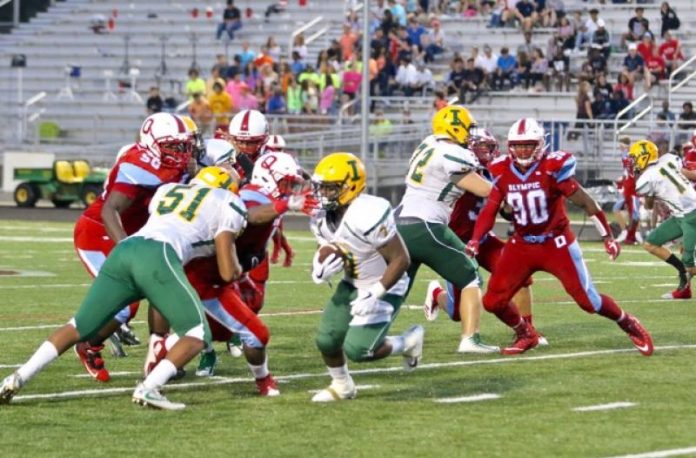 In a Patriots’ mistake-filled game, Olympic picked up their first win of the season 38-6 as Indy fell to 1-2 for the season.

Indy’s Wes Cook took the opening kickoff, crossed the field and pitched to Dylan Bryan who cut the corner and went ninety yards for a touchdown. However, the play was called back for a block in the back putting the ball on Indy’s 45 yard line. Indy was driving the ball down the field but turned it over on a fumble on Olympic’s twenty-seven yard line.

On Olympic first drive Indy’s Sean Pruitt picked off a tipped pass and returned it for ten yards. The play was called back on a roughing the passer call giving Olympic a first down on Indy’s forty-three yard line. Indy’s defense held and forced a punt.

After the punt, Indy completed a twenty yard pass but fumbled the ball and Olympic took over on Indy’s forty-eight yard line.

Olympic drove the ball down to Indy’s five yard line and scored on a five yard run. The point after was good and the Trojans took a 7-0 lead with 3:47 to go in the first quarter.

With 9:59 remaining in the second quarter Olympic scored on a twenty-one yard pass play giving the Trojans a 14-0 lead.

On the ensuing kickoff Indy committed another error. Indy’s kickoff receiving team did not play the ball and allowed Olympic to recover the ball on Indy’s twenty-five yard line. However, Indy’s defense held and the Trojans settled for a 29 yard field goal making the score 17-0.

Before the half ended, Indy’s Wes Cooke hit Trevor Bryan for a thirty-five yard touchdown pass, but a flag on the play took the score off the board. The first half ended with Olympic leading 24-0.

Olympic took the second half kickoff and scored at the 10:33 mark making the score 31-0

Olympic recovered another fumble on their own twenty yard line, after Indy fumbled on a long pass play with 7:00 left in the third quarter.

After going up 38-0, Indy finally managed a score that the officials allowed to stand. Indy’s Luke McPhail completed a pass to Chase Rappe who ran it in for the touchdown. The two point conversion was no good, and Indy trailed 38-6 as the game came to an end.

Olympic improved to 1-2 while the Patriots fell to 1-2. Next week Indy will host West Mecklenburg. Kickoff will be at 7:00 p.m.

The Patriots’ showed a lot of fight and effort but due to turnovers and penalties came up short.