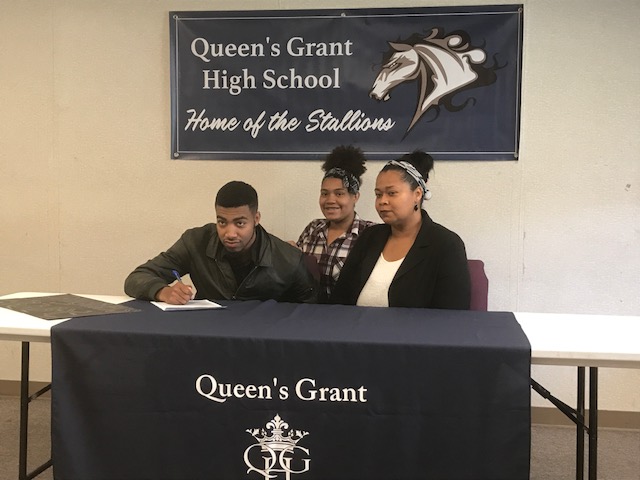 Terron Dixon the all-time Queens Grant High School scoring leader with a career 1,236 points has made a commitment to begin his college basketball experience with Guilford Tech in the fall.

The senior All-Conference player who is an athletic 6’3″ shooting guard averaged 17.8 points per game and 7 rebounds while scoring a team high 374 points for the season.  He led the Stallions to a 13-11 season while missing three games due to a car accident during the end of his senior year campaign.

Dixon is the type of basketball player who glides on the court.  He has a good shooting eye, is always hustling, can rebound at his height and is willing to feed the ball to other team members for assists.  He has the courage to drive the middle toward the basket for a lay-up, can play defense and will push the ball up court.

He should do well at the junior college level, however, he has the capability to play Division II college basketball.  This is his goal as he plans to make his mark at Guilford Tech.  He also plans on focusing in the classroom to make sure he is eligible to fulfill is objective which is a good Division II program preferably in state.  However, he will consider all his potential options over the next few years.

What keeps Terron motivated is to reach his ultimate goal and to remain on course to achieve his dream.  He also understands the importance of getting an education because someday he won’t be able to play basketball.   He does want to transfer to a four year college to continue his education.

Terron would like to thank QGHS Coach Jay Forsythe for believing in him and for his assistance in getting this opportunity.  He had some other junior college choices and he selected Guilford Tech over his other options as this situation is where he felt most comfortable to begin his college career.

He looks forward to proving that he was underrated in the talent pool.  He feels the accident limited his options and had a negative impact upon his recruitment.  So he has a little extra motivation to perform as a solid student athlete.  Terron would also like to thank Coach Kirk Chandler at Guilford Technical Community College for giving him this great opportunity to improve his skills and make himself a better player.

Finally, he would like to thank his mom for all her support over the years.  “My mom has always stood by my side, she is my rock,” said Terron.