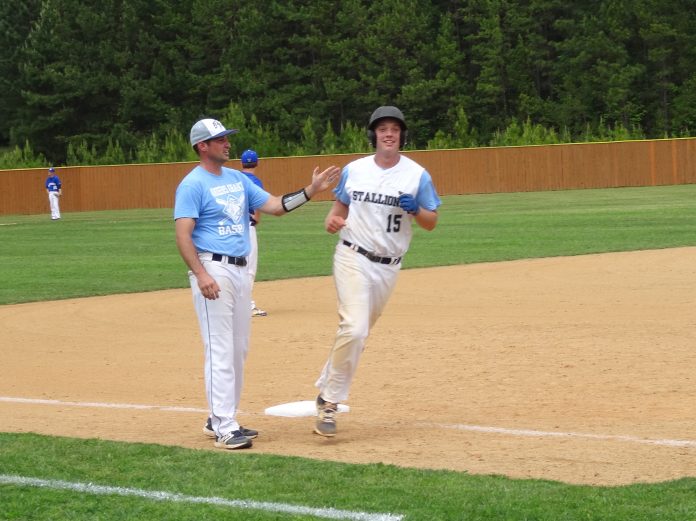 The Queens Grant Stallions baseball club beat Albemarle 8-3 on a hot sunny afternoon on their home field this passed Saturday.

The young Stallions ended their regular season with a 9-14 overall record. 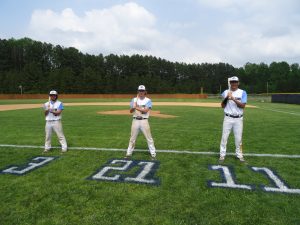 It was Senior Day and the three Stallion seniors Noah Richter the four year varsity player, Kevin Corley and Michael LaForgia all had solid performances during their last game on the Stallion new home field.  Noah went 2-4 with an RBI, Kevin 3-4, and Michael 3-3

with an RBI as the seniors lead their young teammates to a convincing victory over the Bulldogs.

Starting pitcher junior John Orlowski gave up 1 hit, 1 earned run and fanned 7 batters in his five innings of work.  He had his breaking ball going for him, and his fastball was wild enough to keep the Bulldog batters off stride.

In the bottom of the first inning Kevin Corley singled, Spencer Smith was hit by a pitch, Mike LaForgia singled in the hole to drive in Corley.

John Orlowski hit a slow roller toward third base and the speedy Smith scored as the Bulldog third baseman only had one play to first base.  Noah Richter hit a line drive for the second out, after a base on balls to Jacob Laplant, Nick Kuebler was hit by a pitch, Andy Duran singled to score the third run of the inning.

Both teams put up goose eggs in the second and third innings.  However, in the top of the fourth inning Stallions pitcher John Orlowski gave up his first hit,walked the next batter, threw a wild pitch with runners now on second and third with no outs. The next batter hit a sacrifice fly to left to score the runner from third, then

“The Big O” bared down to get the next two batters to pop-out to end the Bulldog threat giving up only one run limiting the  damage.

In the bottom of the fourth Jacob Laplant was hit by a pitch, took second on a passed ball, and with two outs Andy Duran singled in the runner to give the Stallions a 4-1 lead after four innings of play.

In the fifth inning the Stallions broke the game open when with one out John Orlowski hit his first home run in the new stadium over the left field Stallion Monster to increase the lead to 5-1.  Then with two outs Noah Richter singled, Jacob Laplant and Nick Kuebler walked to load the bases,

Michael Richter walked on a 3-2 count to force in Richter, then Andy Duran hit a line drive single for the RBI giving the Stallions a commanding 7-1 lead.

In the top of the sixth inning Jacob Beard replaced Orlowski on the mound.  Albemarle greeted the freshman lefty with two runs on 3 hits and a sacrifice fly to close the gap to 7-3.  In the bottom of the sixth on two singles by Beard and Richter and two hit batsman scored an insurance run for the Stallions extending their lead going into the seventh inning to 8-3.

Beard settled down in the top of the seventh after giving up two hits with one out to get the final two batters to end the game.

The Stallions will be heading to the Uwharrie Athletic Conference Tournament at South Stanly next week to take on their conference rivals.