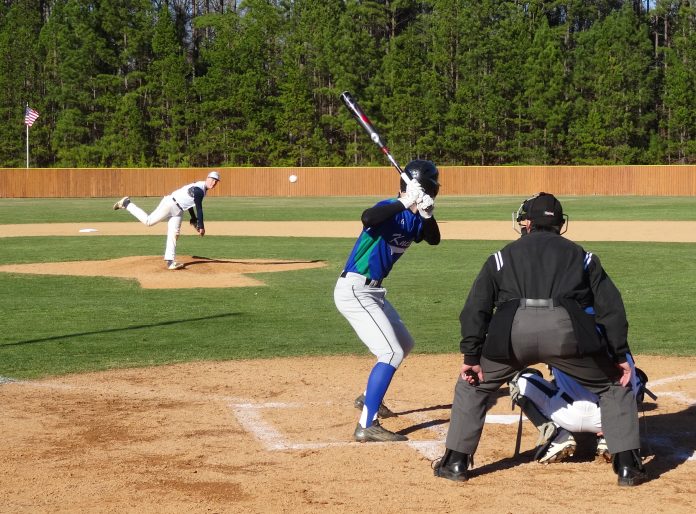 The QGHS baseball Stallions get shut-out in home opener 4-0 to Lake Norman Charter.  The game was played in a sunny cold and breezy day on their new baseball field.  The young Stallions showed they still need to mature against an experienced senior team who had their number one starter on the mound.

The first three innings were scoreless with both pitchers putting up goose eggs.  However, in the top of the fourth John Orlowski the junior flame thrower for the Stallions walked the lead-off batter.  With one out the runner took second on a throwing error on a pick-off attempt. With two outs after a strike out a clean line drive single up the middle to center scored the games first run in the new ballpark.

In the fifth inning an unearned run was scored after the third baseman missed a hard hit ground ball that went under his glove giving the Knights a 2-0 lead.

Pitcher John Orlowski pitch a solid 5 innings giving up one earned run, two hits, with 7 strike outs and 1 base on balls.  His current ERA for the young season is a team leading 1.40.  Freshman crafty left hander Jacob Beard pitched the last two innings giving up two hits and two unearned runs based on some sloppy fielding in the infield for the Stallions along with a walk in the rocky sixth inning after two quick outs were recorded giving the Knights a 4-0 advantage.

The Stallions had their opportunities to score in the third, fourth and fifth innings all with two outs with runners on second or third base and could not get the key hit to capitalize on some of the Knights mistakes.

Since this was the home opener and first game ever for the Stallions at their new stadium it was a disappointment to experience the home loss.  However, the team is young and they are now 1-2 on the season with plenty of games ahead to be played.  The Stallions are very proud of their new facility on campus and they fully appreciate the private donations made by the community including the Charlotte Adult Baseball League, Publix Supermarkets, and Griffin Masonry, said Coach Dan Kerr.

The next home game for the Stallions is on Thursday March 9th against Bradford Preparatory School a non-conference game with the first pitch being thrown at 4:15 pm.