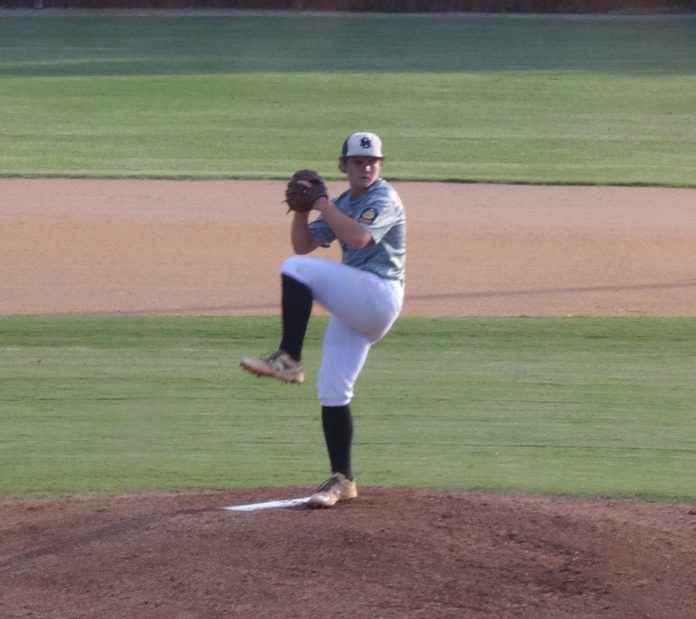 The Junior American Legion Mint Hill Marines (ages 14-16) defeated Stuart Cramer in a legion game on the Independence High School diamond.  The team lead by Indy baseball coach Dan Cooke was in control of this ball game from the very outset.

Mint Hill pitcher Ryan Mangum hurled an outstanding complete game for the marines earning a Semper Fi.  He allowed only 1 run on 6 hits with 5 strike outs and allowing 4 base on balls over seven innings of work.

After a scoreless first inning, in the bottom of the second the home team struck with 4 runs on 3 hits and 4 walks.  Connor Randall belted a solid single up the middle into center, Tate Peterman followed with a single to right field, after a tapper to the mound with runners on second and third Anthony Taylor walked to load the bases, Ryan Mangum smacked a single driving in the runner from third, then Bryson Jusko and Noah Howie both walked on 3-2 counts for a 3-0 lead.  Stuart Cramer changed pitchers and new hurler Steven Kock released a wild pitch scoring Brandon Moser from third for a 4-0 Mint Hill advantage.

In the top of the third inning after striking out the lead-off batter the next Stuart Cramer hitter drilled a triple over the left fielder off of Mangum.  He walked the next batter who stole second base, with runners on second and third the run scored on a ground ball to second base while advancing the runner from second to third base.  Mangum ended the threat by getting the next batter to hit a fly ball to right field for the final out.  The marines still lead 4-1.

In the bottom half of the third inning Connor Randall walked, Tate Peterman put down a perfect sacrifice bunt moving Randall into scoring position.  Ben Hagan hustled an infield hit putting runners on the corners for Ryan Mangum with two outs who promptly singled through the left side of the infield scoring the runner for his second RBI.  The marines now have a 5-1 lead after three innings of play.

No runs were scored again until the bottom of the sixth when Noah Howie belted a double on a one hopper off the left field fence to start the inning.  He would eventually score on a wild pitch giving Mint Hill an insurance run with a commanding 6-1 lead going into the seventh and final inning.

In the seventh Mangum had the lead-off batter hit a weak fly ball to right field for the first out.  After giving up a base hit, he promptly would retire the next two batters on a strike out and a lazy fly ball to center field for the complete game victory.