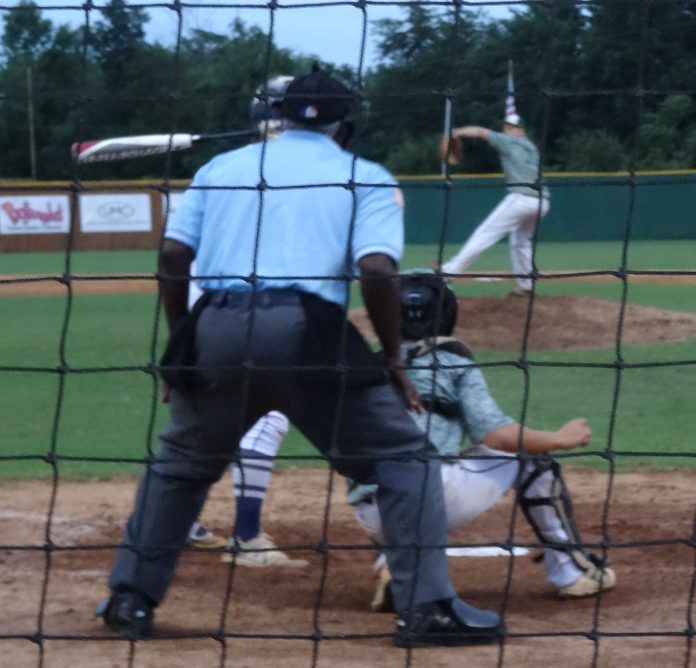 Mint Hill’s Jonathon Todaro who recently pitched a solid 6 2/3 innings for the Marines did not have his good stuff and the West team scored 3 runs on 3 hits and 2 walks.  Connor Randall entered the game on the mound with two outs and hurled a wild pitch to score an unearned run.  However, he settled down and would strike out the next batter to avoid any more damage.

In the bottom of the first inning Ryan Mangum singled and reached second on a wild pitch. With Corbin Berkovics on first due to a fielders choice, Colby Ryan hustled an infield hit to load the bases.  Peyton Milleman on a 3-2 pitch walked to score Mangum.  Still with the bases loaded the visiting pitcher would retire the next two batters ending the first with a 4-1 West Gastonia lead.

In the second the visitors scored five more runs on 3 hits, and 4 walks giving them a huge 9-1 advantage early in the game.  However, the Marines mounted some offense of their own when Tate Peterman was hit by a pitch, Ryan Mangum singled, Bryson Jusko singled to drive in Peterman, then Corbin Berkovics singled driving in Mangum, with runners at the corners Peyton Milleman doubled for 2 RBI’s.  The inning ended with Mint Hill trailing 9-5.

The visitors added another unearned run in the third on an errant throw to get a force at second base and the next batter belted a triple deep into left center field that rolled to the fence.  In the home half of the third Kellen Goodman walked, Anthony Taylor singled, after a wild pitch with runners on second and third, Ryan Mangum bounced a ball to third scoring the runner, Bryson Jusko legged and infield hit for an RBI, and Corbin Berkovics rocketed a doubled into the left center field gap off the fence for the final run of the inning.  After three innings Mint Hill was left only behind 10-8 in a wild one at Independence.

With Brandon Moser now pitching for Mint Hill who took over for Randall gave up 2 runs on 3 hits giving the guests a 12-8 lead.  Corbin Berkovics took the mound for the marines and promptly shut down the threat.

After Berkovics set down the visitors in order with two strike outs, the marines responded with 5 runs in the bottom of the fifth.  A couple of walks, a pitching change and another walk, with the bases loaded Berkovics and Colby Ryan reached on errors driving in three unearned runs, Peyton Milleman then drove in 2 runs with a single giving Mint Hill a 13-12 lead.

Berkovics shut West Gastonia down again in the sixth, however in the seventh the visitors scratched a run to tie the game on a ball off the leg of Berkovics.  The inning ended on a nice play by catcher Bryson Jusko on a tapper off of home plate to get the runner at first.

With the game tied at 13-13 in the 8th inning, Anthony Taylor reached on an error by the second baseman, Ryan Mangum hustled an infield hit, with runners on first and second Bryson Jusko smacked a clean hit to drive in Taylor for the walk-off victory.

Coach Dan Cooke of Independence High and the Marines stated after the game he was very proud how his team responded being down 9-1 early and bouncing back while never giving up.  “This is a resilient team, and the job Corbin Berkovics did in shutting their opponent down was outstanding.”