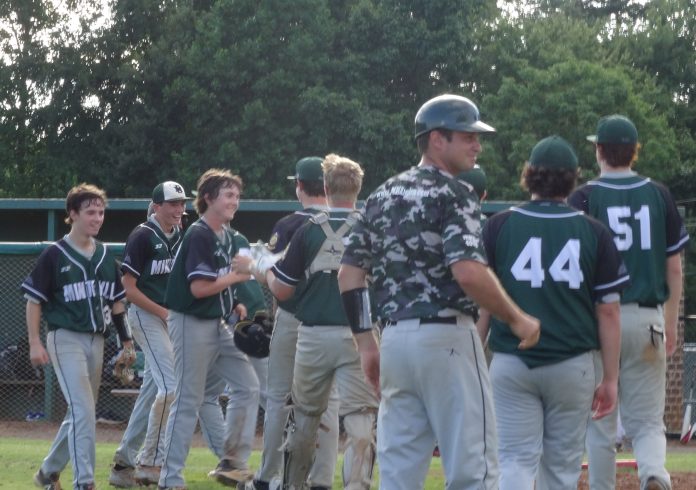 Coach Dan Kerr’s never give up Army team comes back from a 6-0 deficit to roll past West Gastonia on a walk-off hit by lead-off hitter Drew Roberts in the 8th inning Thursday night.

West Gastonia jumped on Mint Hill starter Leo Hoffer in the second inning scoring 6 runs to take a commanding lead.  Just when Hoffer seemed to be settling down after getting into trouble with the bases loaded and striking out the next batter the heavy rains poured down for a 20 minute game delay.  When he returned to the mound it was muddy and getting solid footing may have impacted his pitching.  Hoffer gave up a single for two runs, hit a batter, followed by a single for two more runs and a double to empty the bases.  West Gastonia scored 6 runs on 5 hits to take a 6-0 lead.

In the third Jacob Beard from QGHS entered the game to pitch and the cagy left hander quickly retired the first two batters, however, after a couple of walks and a base hit a relay throw from the shortstop Roberts to catcher John Orlowski nailed the runner trying to score from second base to end the threat.

In the home teams third inning Mint Hill scratched out a run with the bases loaded when Alex Novak drove in a run on a fielder’s choice scoring Travis Ziefert who galloped home from third who earlier singled setting the table for the Army teams first run of the game.

In the fifth with two outs and runners on first and second there was a line drive base hit to center and Army center fielder Andy Duran gunned down the runner at second base to end the threat and save a big run for Mint Hill.

In the bottom of the fifth Army exploded for 5 runs on 5 hits with some help on 2 throwing errors to take a 7-6 lead.  Drew Roberts doubled, Jacob Beard singled scoring Roberts, Alex Novak smacked a base hit and with runners on the corners, Jabe Wilhoit bunted for a base hit, Jacob Eason doubled to empty the bases for 3 RBI’s to tie the score.  The go ahead run scored on an errant throw to give the home team the lead.

In the top of the sixth West Gastonia bounced back by scoring a run on a fielder’s choice to tie the game off of new Army pitcher Andy Duran.  No runs crossed the plate in the home sixth and seventh innings.

Drew Roberts pitched the eight inning for Army and after giving up a lead-off double he retired the next three batters with no further damage.

In Army’s eight Bryce Gorospe singled, Travis Ziefert walked, Gorospe steals third base, Ziefert second base, and with runners on second and third Drew Roberts smacked a clean single scoring the runner from third for the walk-off 8-7 Army victory.

Coach Kerr after the game stated how proud he was of this team by never giving up and coming from behind by 6-0 to beat a good ball club.  The team played 8 games in 5 days on the road with 3 extra inning games so winning at home was real sweet.