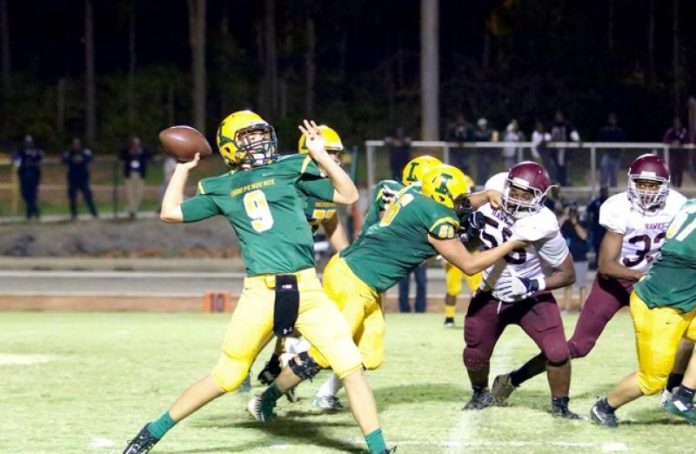 Five first half turnovers turned out to be enough offense for the West Mecklenburg Hawks to take a 59-28 non-conference victory over the Independence Patriots Friday night at Independence High School.

The Patriots gained seventy yards on their first offensive series. Quarterback Wes Cook picked up thirty yards on a keeper then hit Dylan Bryan on a forty yard pass play down to the Hawks ten yard line. But on the next play, Indy fumbled the ball on the exchange, and West Meck came up with the recovery stopping Indy’s opening drive.

J’Mari Taylor, the Hawks’ sophomore quarterback, looked more like a senior completing his first seven passes as he moved the ball quickly down the field. After a Ty Clawson sack and on a third and four, Taylor found senior receiver and North Carolina commit Dymal Brown for a 33 yard touchdown pass giving the Hawks their first score at the 8:05 mark in the first quarter.

On Indy’s second possession Wes Cook hit Dylan Bryan for an eleven yard pick up but was intercepted on the next play giving West Meck the ball on Indy’s 15 yard line.

On the Hawks first play Indy’s big defensive end Kaleb Baker made a big stop for no gain. On the next play Taylor went to Brown for a 15 yard touchdown pass moving the Hawks out to a 14-0 lead with 6:11 remaining in the first quarter.

After an Indy punt, the Hawks took over on the Patriots’ 42 yard line. An Indy pass interference call gave West Meck a first and ten on Indy’s eleven yard line. On a quarterback keeper Taylor ran for the eleven yard touchdown making the score 21-0 with 2:26 left in the quarter.

After the ensuing kickoff, Indy started on their own twenty yard line. Dylan Bryan picked up 46 yards on a pass form Cook. With 38 seconds to go in the first period the Hawks interfered with Chase Rappe giving Indy the ball on the Hawks’ 24 yard line as the first quarter ended with West Meck leading 21-0.

On the first play in the second quarter Indy’s Xavier Lloyd picked up ten yards moving the ball down to the 14 yard line. On the next play, Indy ran an end around to Dylan Bryan who lost the ball fighting for extra yardage. The Hawks’ Dyami Brown picked up the loose ball and returned it 89 yards for the score putting the Hawks up 28-0 with 11:26 remaining in the first half.

On Indy’s next possession Wes Cook dropped back to pass, was brought down hard and lost the ball on the 28 yard line which was recovered by West Meck. Cook injured his calf muscle on the play and limped off the field.

Hasssani Sneed came in as the Hawks’ quarterback and hit Taylor Barnes on a quick pass to the seven yard line. Sneed then hit Barnes in the back left corner of the end zone for the touchdown to make the score 35-0 with 10:50 left in the first half.

Luke McPhail took over for the injured Wes Cook. McPhail threw to Shai Wheeler for an eleven yard first down. McPhail found Dylan Bryan open for a ten yard gain. McPhail went back to Dylan Bryan for five more yards. After moving the ball down to the Hawks’ one yard line, Elijah Beamer took it in for Indy’s first score making the score 35-7 with 8:46 left in the first half.

The Hawks started their next series on their own 35 yard line. Indy’s linebacker Ty Clawson stopped the run for no gain. On the next play defensive end Kaleb Baker sacked the quarterback for a loss. Clawson came up with another solo tackle stopping the run just short of the first down marker.

The Hawks came back scoring two more times before the first half ended. Taylor scored on an eleven yard quarterback keeper to make the score 42-14 with 2:21 left in the first half.

With seconds left in the first half Indy was faced with a forth and ten deep in their own territory. McPhail dropped back to pass, got sacked and fumbled the ball on the tackle. West Meck’s Aaron Judkins picked up the ball and ran it in for a 25 yard fumble return making the half time score 49-14.

In the third quarter Indy scored first on a 25 yard fumble return by defensive end Kaleb Baker to make the score 49-21 with 5:54 remaining in the quarter. With 3:30 left Indy’s defensive back Zack Repak made an interception in the end zone giving Indy the ball on their own twenty yard line.

McPhail was intercepted and the Hawks took over on Indy’s 16 yard line. Indy’s Ian McCaskill stopped the Hawks by recovering a fumble on the 26 yard line giving Indy the ball back.

With the ball on Indy’s own 33 yard line, Elijah Beamer hit a hole and ran 67 yards for his second touchdown making the score 49-28 with a 1:42 left in the third quarter.

With West Mecks’ starters back in the game, Taylor hit Brown for a 42 yard touchdown pass moving West Meck out to a 56-28 lead with 29 seconds left in the third quarter.

With 5:22 left in the fourth quarter Indy’s defense held, and the Hawks had to settle for a 33 yard field goal by Christian Alvarez to make the score 59-28.

The Patriots with their never quit attitude came fighting back. Beamer picked up 19 yards on two carries, then hit a big opening created by Corbin Berkovics and Chris Anderson, for a 32 yard gain. On the next play McPhail dropped back to pass and came up injured on the sack. Wes Cook, with a calf injury, was called back to action. With Indy facing a fourth and one, Beamer got stopped inches short of the first down marker, and the Hawks took over on downs.

With a 31 point lead and Indy with no time outs left and less than two minutes remaining in the game, West Meck decided to throw the ball instead of taking a knee and running out the clock. However, Indy’s defensive back Chase Rappe had a different idea and picked off the pass stopping the Hawks with1:46 left in the game.

Indy’s defensive end Kaleb Baker led the defense with 5 solo tackles, one quarterback sack and a fumble recovery for a touchdown. Indy’s linebacker Ty Clawson had 7 solo tackles and 2 assists.

Indy has a bye week and will return to action September 22 when the Patriots will open their conference schedule against Hickory Ridge at Independence High School. Kickoff is scheduled for 7:00 p.m.