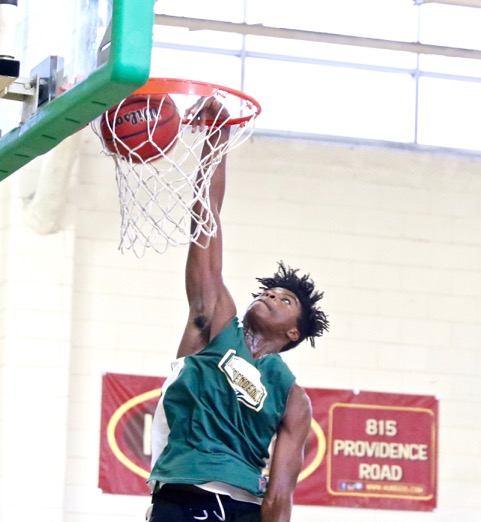 In Tuesday’s CLT Summer League, games played at Myers Park High School, the Lincoln Charter Eagles gave the Independence Patriots a hard fought game which saw Indy come from behind to take the win in overtime.

Indy trailed 11-to-12 at the end of the first quarter and was down by two 24-22 at the half. Indy only scored seven points in the third and was down by three 32-29 going into the final quarter. In the fourth quarter Indy’s Andra’ McKee drove and hit a lay up with 5.6 seconds remaining to tie the score 41-41 sending the game into a two minute overtime.

At the start of the overtime, Patriots’ Jordan Mobley connected on a three pointer putting Indy up 44-41. With less than a minute to go Lincoln Charter hit a three-pointer to tie the score. On Indy’s next possession the Patriots lost the ball but Indy’s Travis Burgess stole the ball with 39 seconds left in the game. The Patriots got the ball to Mobley, who had set up on the baseline, and drained a three-pointer as time ran out giving Indy the win 47-44.

On Wednesday and Thursday June 28 and 29 the CLT Summer League Championship Tournament will take place. All games will be played at Myers Park High School with Wednesday’s games starting at 4:00 p.m. Admission is $2.00.