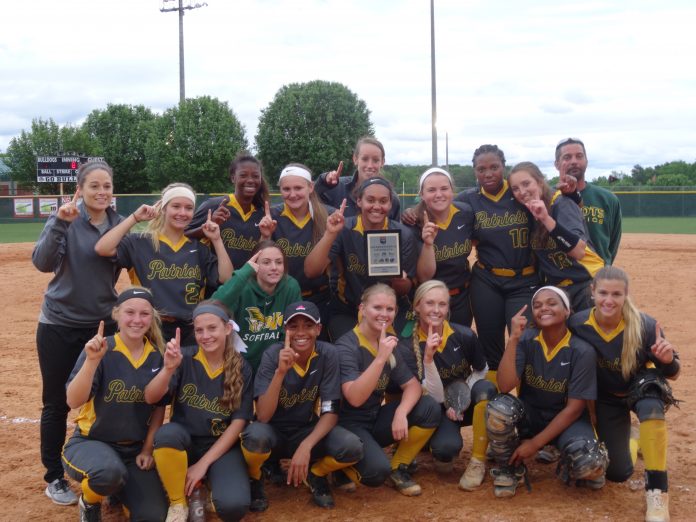 The Independence Girls Softball club lost a tight game against the Titans from Hopewell High School from Huntersville on Wednesday evening in the first round of the 4A Softball Championship Tournament.  It was a well played game, however, the powerful Patriots offense was shutdown by the strong pitching of senior standout Sydney Backstrom who  dominated for the first five innings recording 8 strike outs while giving up only one hit during this span.

Leah Renn the Patriots ace allowed a run in the first inning on two singles and a sacrifice fly by Backstrom to give the Titans an early 1-0 lead.  Renn settled down for the next five innings pitching shut-out softball matching her opponent.  However, in the third inning she gave up a couple of hits and a walk to load the bases and struck-out a Titans batter on a 2-2 pitch to end the threat.  The key play in the inning was when freshman right fielder Jaylin Adkins gunned down a runner trying to score at home plate.

In the fourth and fifth innings Renn shut-down the Titans in order.  However, in the sixth inning it became interesting, the first two batters reached base, with runners now on second and third after Backstrom doubled with no outs, Renn bears down and through pure determination strikes out the next three Titans to keep the Patriots in the game only down 1-0.

Renn pitching her last high school game showed her true grit and competitive spirit.  She pitched 6 innings, allowed 6 hits, accumulated 9 strike-outs, walked 2 batters and gave up only 1 earned run.  She was a warrior on the mound, her leadership was obvious and contagious inspiring her teammates.

In the home half of the sixth inning Anna Easter beat out an infield hit, after a passed ball and with two outs with Easter on second base Brianna Grant hit a clean RBI single to tie the game at 1-1.

In the seventh inning Patriots Coach Amanda Larry called on the Patriots number two starter and number one relief pitcher sophomore Kayla Douglas to pitch the seventh. The combination of Renn and Douglas has been awesome all season long guiding the Patriots to a 17-4 record.  However, the magic did not happen this time around.  The Titans battled to scratch for one run on a double by Backstrom, a walk, an infield hit and a line drive off the glove of Douglas scoring the go ahead run giving the Titans a 2-1 lead.  Douglas settled down to get the third out going into the bottom of the seventh inning.

In the bottom of the seventh with one out Leah Renn hit a double, Kingsley Reardon would hit a deep fly to center field for the second out, Renn did not tag up, however, it did not make a difference as Jaylin Adkins hit a ground ball to shortstop to end the ball game.

Sydney Backstrom pitched a complete game facing 25 batters, striking out 10, giving up 3 hits, no walks, and 1 earned run.  She also went 3-3 with a sacrifice fly and an RBI to lead the Titans to this playoff victory.  The Longwood University Division I recruit definitely dominated the game and showed why she was highly recruited.  Taryn Don went 2-4 with a double and an RBI, while Danielle Stradford went 2-4 for the Titans.

Brianna Grant was 1-3, with an RBI, Leah Renn 1-3 with a double, and Anna Easter 1-3 for the Patriots offensively against arguably the best pitcher Independence has seen all season long.

The Patriots are graduating 5 seniors, however, they have a strong group of youngsters returning who will be expected to step up next year.  Certainly, the team will have two solid pitchers with Kayla Douglas and Jaylin Adkins who will be a sophomore.  You would expect the coaches will be seeking a third hurler.  Meanwhile, a talented crop of good freshman and sophomores will be returning including junior Kendall Anderson, Laikyn Berry, Anna Easter, Emily Shaver, Abrianna Berry, Brianna Grant, Kingsley Reardon and Tia Montalto.