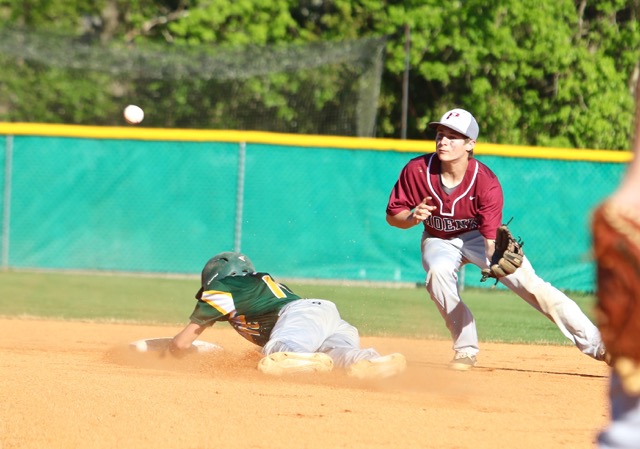 The Patriots got back in the win column Tuesday evening in Indy’s second game of the Hannahan Invitational Tournament getting a 9-2 victory over the Rock Ridge Phoenix from Ashburn, Virginia.

Bubba Comer led off for the Patriots in the top of the first inning drawing a walk then going to second on a passed ball. Nate Brown moved Comer to third on a fly ball to right field.  Cooper Fandel followed and hit a long fly to
right field scoring Comer from third. Dylan Giorgio came to the plate and drew a walk and later stole second. Noah Howie stepped up and singled to the outfield scoring Giorgio. Howie tried to reach second base on the throw
but was gunned down to end the inning.

In the top of the third Bubba Comer led off with a walk and stole second.  Nate Brown attempted a bunt but was called out for stepping on home plate. Up next was Cooper Fandel who hit a double to right field driving in
Comer. Matthew Mangum came in as a courtesy runner for Fandel. Dylan Giorgio stepped up and hit a single moving Mangum to third. Noah Howie reached on a single scoring Mangum for Indy’s second run of the inning to
make the score 4-0 after three full innings.

The Patriots didn’t score again until the top of the fifth inning. Bubba Comer walked and was awarded second base on a called balk. Nate Brown reached on a hard grounder to the third baseman who committed an
error trying to field the ball. Cooper Fandel drew a walk and again Matthew Mangun came in to run. Dylan Giorgio followed and hit a long sacrifice fly to right field driving in Comer. Mangum tried to make it to third but was
thrown out. Noah Howie singled driving in Brown to make the score 6-0.  In the sixth Michael Menzer doubled and scored on a Ryan Mangum double to increase the lead to 7-0.

Rock Ridge picked two runs in the bottom half of the sixth cutting the score
7-2.

Cooper Fandel led off in the top of the seventh with a shot to center field that almost left the ball park. The ball hit the top of the wall and came down in play. Fandel reached second standing up. Again Matthew Magnum
came in to run for the catcher. Mangum stole third and scored on a passed ball. Dylan Giorgio walked and Noah Howie was awarded first base after being hit by a pitch. Noah Haislip followed hitting a sacrifice fly to left
driving in Giorgio to make the score 9-2.

In the bottom of the seventh, Noah Haislip struck out Rock Ridge’s first two batters. He gave up a single before getting the final out on a grounder to the shortstop giving Indy a 9-2 win over the Rock Ridge team.

Haislip picked up the win going the distance for the Patriots giving up two runs on four hits, striking out three and walking one.