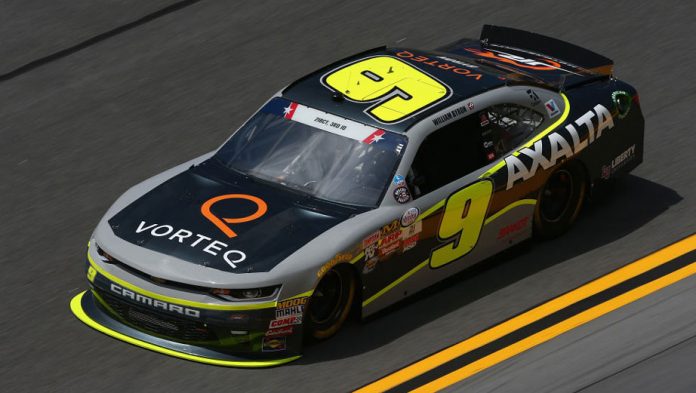 After a rain delay on Friday night the Saturday afternoon race at Daytona International Speedway was a wild ride and a back to back victory for William Byron the amazing young 19 year old emerging NASCAR star.

In addition to weather delays, the race was plagued with wrecks which made it virtually impossible for any driver to build momentum.  There was a total of nine caution flags as well as 18 lead changes and 10 different leaders in a wild contest.

Byron crossed the finish line in overtime as the field behind him wrecked and piled up on the track.  The race ran 104 laps scheduled for 100 laps due to the overtime.

Byron in his No. 9 Chevrolet last weeks winner in Iowa drove a masterful race beating Elliot Sadler to the checkered flag who finished second in the No. 1 Chevy in overtime.

Along with Byron earning the victory at Daytona, Blake Koch and Elliott Sadler earned important points by winning the first two stages of the race.

During late race action in the leading positions of the pack produced a thrilling occurrence on Lap 98 when Justin Allgaier inadvertently pushed Brandon Jones putting him into a spin and setting off a chain reaction that would end up in an 11 car wreck.  Also, when the leader at the time Joey Logano in the No. 22 Chevy was attempting to hold off both driving lanes was pressured and sailed off into the infield grass.  Logano was able to recover with his car intact to continue the race.  The incident negatively impacted his chances for a victory as he finished in eight place.

Byron and Erik Jones were in the front row to start the four lap overtime.  Jones dropped back quickly on the restart when his car appeared to stall, bringing Sadler back into second place.

One last wreck would end the race and secure the win for Byron, as he was able to cross the overtime line before the caution flag was raised.

Next weekend NASCAR moves to Kentucky for more racing action.  On Friday night July 7th starting at 8:00 pm the XFINITY Series continues with the running of the Alsco 300 a 200 lap 300 mile race.  All the action can be watched on NBCSN.