It’s official:  Matt Cash, age 35, is the World’s Best Bricklayer.  Matt came away from the 2017 SPEC MIX BRICKLAYER 500® World Championship with the keys to a 2017 F-250 4×4 XLT Super Duty Truck and $15,000 worth of cash and prizes.  The competition for this year’s title was held in Las Vegas at high noon on January 18th.  Matt is a bricklayer for Huntley Brothers Company, Inc., located on Fairview Road in Mint Hill.

The family-owned company had a lot to celebrate.  One of the joint owners of Huntley Brothers Company, Chet Huntley, walked away with his own title – SPEC MIX TOUGHEST TENDER®.  Along with the title, Chet received a check for $2,500 and additional prizes worth over $1,400.  Twenty-five teams came from all over the world including Canada and Australia to compete.

The SPEC MIX BRICKLAYER 500® World Championship is in its 15th year as a bricklaying competition.  Huntley Brothers Company is a frequent competitor and was back in the mix this year sending bricklayer Matt Cash and mason tender Chet Huntley.  Huntley Brothers also has 2-time past winner Garret Hood working with them.

For the competition, each two-man team is made up of a bricklayer and a mason tender.  The bricklayer is given an hour to build a double wall.  In addition to counting the number of bricks used, judges determine the quality and deduct points based on errors in the wall such as the wall tilting too much or the bricks facing the wrong way.

The mason tender sets up all of the supplies the bricklayer will need to make his job go faster.  This year, Chet Huntley acted as Matt’s mason tender.  “Chet makes sure Matt has what he needs,” Tim Huntley explains.  “Chet can’t hand Matt anything or he would be disqualified.  But he can place the bricks so Matt can grab them.

He can also help watch for errors on Matt’s wall, kind of like a coach.”  In the one-hour competition, Matt laid 716 bricks to secure his title.  About 4,000 people attended the event.  Family and friends gathered at Huntley Brothers Company to watch the live stream video.

Lib McGee Huntley was also watching her son, Chet, compete for the SPEC MIX TOUGHEST TENDER® title.  In this event, 25 mason tenders stage all of the materials that will be used for the main bricklaying competition.

This includes moving 1,000 bricks (or about 5,000 pounds worth) to the building site as well as the blocks and boards that form the base for the wall.  Contestants must place the wheelbarrow in the correct position and move any broken bricks and other debris away from the worksite.

Chet Huntley finished his work in 15 minutes, 12 seconds.  “I was totally surprised I won,” Chet says.  “My mother watching back home couldn’t believe at [age] 45 I was the ‘Toughest Tender.’ It was a great feeling—but I was thrilled for Matt—winning the SPEC MIX BRICKLAYER 500 was all he’s talked about for the past 3-4 years, and he nailed it!”

This is the first time in the competition’s 15-year history that a bricklayer and mason tender team each took first place in their respective competitions.  The five generations of bricklayers in the Huntley family have always been dedicated to the trade.  With 105 employees, the company currently has projects in Charleston and Savannah as well as commercial and residential projects closer to home. 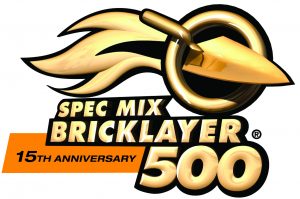