This past Saturday night the Town of Mint Hill’s Family Fun Night and Fall Pep Rally ended the summer in an entertaining and energetic way. The event featured two bouncy houses; an outdoor game court that featured cornhole, a giant Jenga game, and multiple free-standing basketball hoops; face-painting by Charlotte Body Art; food truck from local popular vendors such as Pelican’s Snoballs, Lil’ Yummy O’s Donuts, Sugarfix Ice Cream, and Mama K’s Kettle Corn; and a finale parade starring the Independence Patriot Pep Band and all the Fall sports teams. The Chik-Fil A Cow even stopped by to dance with members of the crowd.

The organizer of the event, Sheryl Smith, was proud of the event and the turnout. “This is our second year hosting this event, and it has gotten even better.” Smith says, “The Town is beginning to host an event once a month. I can’t think of a better event to start with than this one.” She made sure to extend her thanks to the event sponsors: Food Lion, Atrium Health, the Arts & Science Council, and Truliant Federal Credit Union.

Tim McWhirter, with Truliant, looks up and down the line of sponsor tents and claims it’s no surprise that local businesses like his are sponsoring. “This event is made great by the people who organize and attend it.”

“That’s what we’re about: people.” McWhirter’s table partner, Elaine Johnson, joins in. “We work for people and with people.”

The Independence Booster Club was also an integral part of organizing the event. Members were present selling spirit wear, presenting giveaways, and drumming up new members. Booster Club Vice President, Shawn Shaver, has infectious enthusiasm for her team and the school she represents. “Our goal is to try and create a feeling of generational community. Someday, these little ones that are running around will be Patriots. We work with Bain Elementary and Mint Hill Middle to make Independence feel like a Mint Hill tradition.” Shaver encourages any and all members of the Mint Hill community to join the Boosters the first Tuesday every month to discuss all the positive changes they hope to bring about this school year. 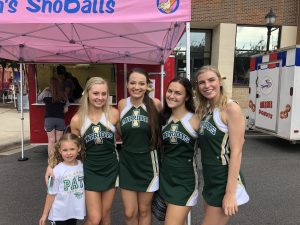 And the energy displayed by the parents and families was only enhanced by the student body and its teachers. “Independence feels like a family. This event always feels like a Patriot event because we get to come together and celebrate.” exclaims math teacher, Maria Hawthorne.

“Yes!” her cheer mate, Gabrielle Pinto, chimes in, “it’s a chance for us to get excited about the upcoming school year and sports seasons.”

“Not just excited – we get hype!” Rachel Reed, another cheerleader and friend of Pinto, corrects with a big smile.

Even a light spattering of rain couldn’t stop those in attendance from enjoying themselves. Just after 7 pm, Mike Patel, the voice of Independence High Football, took to the stage to begin the parade. As “We Are the Champions” by Queen blasted through the speakers, Patel welcomed the crowd. “Our Patriots are ready to conquer the upcoming year. Independence is really a school of champions in all areas: academics, arts and sports.” He says to a round of enthusiastic cheers.

Then, Principal David LeGrand thanked everyone for their support of his school and its student body. “Last year we were second in the state in terms of academic growth. This year we’re gunning for first!” LeGrand proudly promises.

The following parade of Pep Band and sports teams was gladly received and recognized by the crowd. LeGrand wraps up, “We love to kick off the year on a fun note. I know the entire teacher and student body at Independence is excited about the year ahead.”