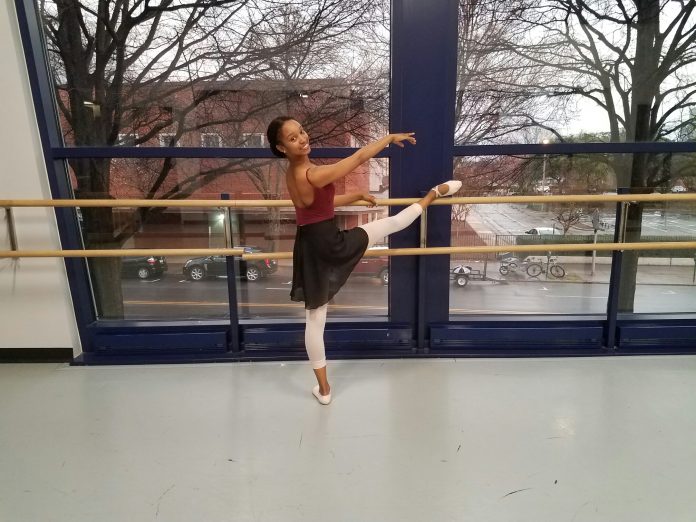 Queen’s Grant Senior Sabriyya Dean recently had the honor of dancing in the Charlotte Ballet’s production of Sleeping Beauty.

Dean began dancing thirteen years ago when she was only four years old. When she was about nine, Dean began training at Charlotte Ballet Academy, which has the distinction of being the only ballet school in the state of North Carolina affiliated with a nationally renowned professional ballet Company.

Dean began in Charlotte Ballet Academy’s Reach Program, a nationally recognized community outreach program designed to make quality dance training accessible to community children. At the age of twelve, Dean was awarded a full scholarship to train with the Academy.

Since the age of twelve, Dean has performed every year in the Charlotte Ballet’s annual production of The Nutcracker at the Blumenthal Performing Arts Center. She has played many different roles: a soldier, an Arabian, a party friend, a candy cane, Wine and Tiramisu.

In Charlotte Ballet’s production of Sleeping Beauty, which ran from March 10 – 19, Dean played the role of Garland Dance. Additionally, she was asked to appear on stage during intermission with a few of her fellow dancers to answer audience questions.

Dean was surprised to see some familiar faces in the audience on March 15, when Queen’s Grant Drama Teacher Elizabeth Mills brought students from her dance classes to the performance. “I did not know that they were going to be attending the show,” said Dean, “and when I noticed them, I couldn’t believe they were there! The next day at school they congratulated me on my performance, which made me feel good.”

Like many high school seniors, Dean is not precisely sure where the future will lead her, but she knows it will involve dance. “To me, dancing is everything,” says Dean. “It’s my passion, and it’s my dream to become a Principal dancer in a professional company one day.”

Dean plans to pursue college in the fall in order to further her dancing career. “But Charlotte Ballet will always be a part of me because that’s where my journey began,” she says.