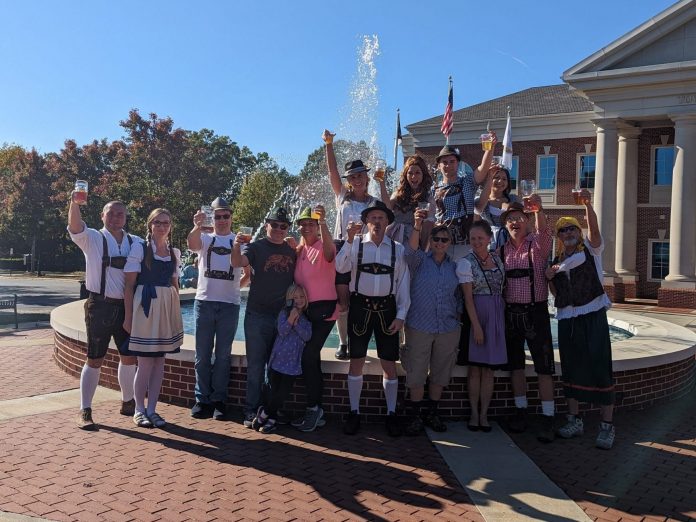 Originally scheduled for October 1, Mint Hill’s Oktoberfest is one of many outdoor events that was canceled or postponed due to Hurricane Ian.  Determined not to let inclement weather ruin the fun, hosts Anna Granger (1st Choice Properties) and Sarah Brock (Pour 64) made the difficult decision to move the event to the next Saturday available for much-loved German food truck Strudelteig – a date that happened to coincide with the final day of Mint Hill Madness.

The postponed version of Oktoberfest began early in the afternoon to allow people time to get to Veterans Park for another beloved Mint Hill Traditions, the Mint Hill Madness Fireworks Extravaganza.  Hosted by Pour 64 and 1st Choice properties, the family-friendly event included live music from Matt Alban, team-oriented games, and, of course, authentic German fare and seasonal brews.

The costume contest is a favorite of 1st Choice Properties Owner Anna Granger.  “It really adds to the atmosphere and makes it more fun and entertaining!” explained Granger, who plans a unique costume for herself every year complete with a wig!  “I love seeing what people find to wear.  Even with having to reschedule, people really gave it their all in the costume contest this year!”

Another highlight of Oktoberfest is the fun, individual and team-oriented games!  In the Stein Hoist, contestants competed to see who could hold a full stein up the longest, and in the much-loved sausage toss, partners have to toss a raw bratwurst back and forth from increasing distances.  Although Brock always has to cajole people to participate, they end up getting very competitive once the games are underway!

Despite having to reschedule, the Third Annual Oktoberfest was still a success.  “Oktoberfest is just a wonderful way to bring this community together,” concludes Granger.  “It’s something different from any other event in Mint Hill.  We’re glad we were able reschedule, and we’re already looking forward to the Fourth Annual Oktoberfest next fall!”