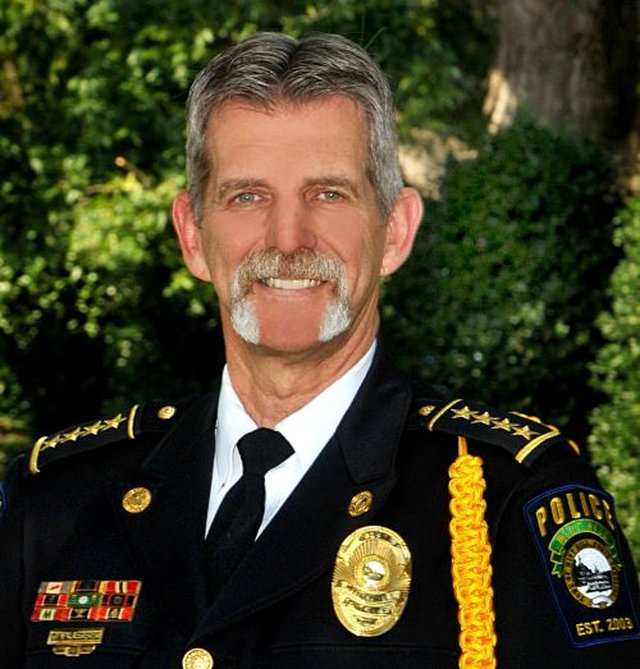 MINT HILL, NC – Chief Tim Ledford will conclude a four-decade-long career in law enforcement this December when he steps down from his role as Mint Hill’s Chief of Police.

As a young man graduating from high school in the 70s, Ledford wasn’t envisioning a career in law enforcement.  “When I was in high school, my dad was a building contractor,” says Ledford.  “I was going to get my contractor’s license, carry on the family tradition.”  But Ledford’s plans changed when an army recruiter visited his community college.  “He gave us this spectacular speech about how great the army was, and he was needing some new recruits, and he made it sound like a bed of roses!” continues Ledford.  “I raised my hand and said ‘I do’ and joined the army as a military policeman in 1974.”

Ledford continued with the North Carolina National Guard when he left the army in 1976.  He worked for the police department in Franklin, NC, for several years before helping to start up a new police department in King, NC, in the mid-80s.  Ledford stayed 22 years in King, assuming the role of chief of police for the last five.

When Ledford heard about the opening for a chief of police in Mint Hill in 2008, he and his wife spent a weekend here visiting restaurants and talking to locals.  “It felt very welcoming,” Ledford recalls.  “The people were very down-home if you will. I loved the atmosphere about this town, the way people seemed so friendly and welcoming. My wife and I talked about it on the way back to our home in King, and I told her I really love this location, love the people and I’m putting in an application.  She said I think you should! I did, and the rest is history.”

Ledford’s humble explanation makes it sound easy, but the truth is that Mint Hill was – and still is – a highly sought after appointment for an aspiring chief.  Ledford faced stiff competition for the position, beating out 120 other candidates.

Over the twelve years he has spent in Mint Hill, Ledford has helped pioneer several programs he’s proud of, like Coffee with a Cop, Mint Hill Citizens Academy, and Volunteers in Police Service.  “Those are just some of the programs that we started here when I first arrived,” says Ledford, “and I’m proud of all those accomplishments. The people in Mint Hill tend to love their police department, and I think it really boiled down to getting out and intermingling with the citizens, being able to talk to them one-on-one.”

After over a decade in Mint Hill, Ledford still considers himself lucky to work in a town where he has the support and trust of the citizens and the local government.  “When I was first hired, the manager and the mayor, they came to me and said, look, Chief. We don’t know how to run a police department.  That’s why we hired you,” says Ledford.  “We’re not going to tell you how to run it. We’re just going to offer you advice and make sure you’ve got the resources to accomplish the mission.  A lot of police chiefs do not have that luxury.  When I go to different conferences, chiefs’ meetings, I’m always talking about how good I’ve got it here in Mint Hill!” continues Ledford.  “I’ve had police chiefs offer me money to retire early so they can apply for this position!”

For now, at least, they won’t get the chance as Mint Hill intends to fill Ledford’s vacancy internally if possible. “I’ve been mentoring one of the command staff officers here at Mint Hill,” says Ledford.  “The town manager says he’s going to give him an opportunity to take the lead, if you will, and just see how that works. If he does well, he’s just going to do an internal promotion.”

As for Ledford, he hopes to pursue teaching.  An adjunct professor at local community colleges for over 15 years in criminal justice, Ledford is a state-certified physical instructor trainer who does physical training for cadets and basic law enforcement training classes.  “I’m excited about this new chapter and am looking for opportunities,” says Ledford.  “I’m really interested in doing some instruction at one of the local community colleges.”

December 31, Ledford’s official retirement date, will bring an end to a career of over four decades in law enforcement.  “I’ve been in law enforcement for almost 46 years,” says Ledford.  “I love what I’m doing.  You know, most police officers stay 30 years and they take that retirement and go on to another full-time opportunity somewhere else. I love what I’ve been doing for the last 40 plus years.  I just think it’s time for me to start that new chapter in my life.” 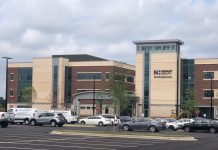 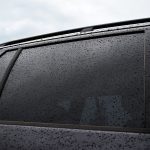 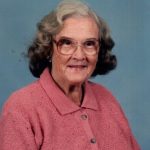 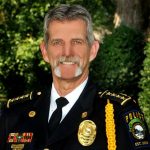 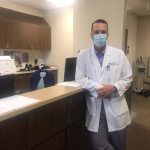 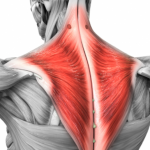 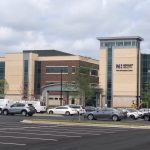