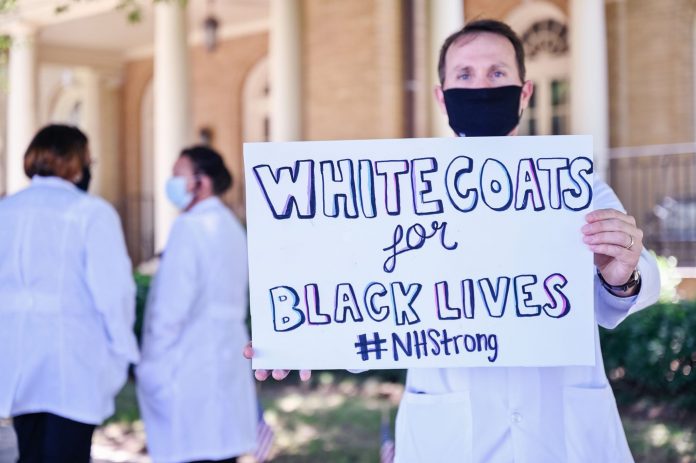 MINT HILL, NC – On June 22, all physicians and team members across Novant Health’s footprint were invited to participate in a demonstration of “White Coats for Black Lives.”

At 12:00 pm, team members at Novant Health Mint Hill Medical Center joined together to take a knee and observe a moment of silence for racial equality.  The event drew a wide array of healthcare workers from across the organization; in addition to hospital workers from across the state, participants included corporate workers and clinicians from all across North Carolina.

According to Dr. Larry Martin of Novant Health Orthopedics and Sports Medicine – Mint Hill, the goal was to show support for the Black Lives Matter movement, to actively demonstrate Novant’s commitment to fighting racism.

“For me personally, being African-American, I’ve felt the backlash of racism,” says Martin.  “I’ve felt it personally, I’ve heard stories of it.  As a father to young, male, Black children, I’m concerned with their safety.  It was important to me to show I’m active in this movement.  However I can support it, I’m there to do it.”

For Martin, the fight to end racism holds particular importance for health care workers.  “It affects all of us,” says Martin.  “It’s a human issue.  Anything that is evil or mean, anything that causes harm to another human being, I think we should, as healthcare workers, try to end that.  That’s what we do every day.  Our goal is to heal people.  Racism is another disease that has plagued this country.”

The demonstration is one small piece of Novant Health’s commitment to advocate for justice and equality in the Black community, and it’s one of many steps the organization is taking to bolster diversity and inclusion for its more than 30,000 team members.

“At Novant Health, we recognize that every person is different, each shaped by unique life experiences,” says Dr. Pam Oliver, Executive Vice President of Novant Health and President of Novant Health Physician Network.  “Two of our core values as an organization are diversity and inclusion, and compassion. Racial inequality is once again causing pain across this entire nation and our work on diversity and inclusion and health equity are more important than ever before.”

To that end, Novant Health’s diversity and inclusion team have created guides on how to initiate a productive dialogue about race, racism, diversity, and inclusion. The organization has also provided self-assessment tools designed to help team members examine their own biases.  Implicit bias training for physicians and team members helps to highlight blind spots and race-conscious beliefs that individuals may not even be aware of. 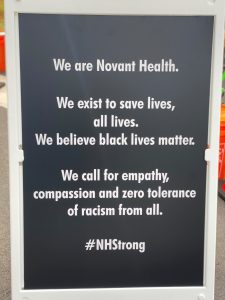 Over the last few weeks, Novant Health executives have hosted a number of webinars for team members, including “Courageous Spaces,” where team members shared courageous conversations they’ve had with others in recent weeks about race relations. Delivering on their promise to keep diversity, inclusion, and health equity at the forefront, Tanya Blackmon, Novant Health’s Executive Vice President and Chief Diversity, Inclusion and Equity Officer, was recently named one of the top African American Leaders in healthcare by Becker’s Hospital Review.

For Novant Health’s PRIDE Business Resource Group president, Jennifer Meadows, it’s important that Novant Health not just be “not racist,” but work to actively become anti-racist. “We are taking care of black and brown bodies, people of all different colors,” says Meadows.  “It’s important that every single person knows how to respectfully interact and care for everyone regardless of skin color.”

Steps like these may seem extreme to people who think we don’t have a problem with racial inequality here in Mint Hill.  “If it’s not something that people think is happening, it’s time to pay attention,” says Meadows.  “It’s time to seek out that education and see how you can work to become anti-racist.  This is real life for Black Americans.  They don’t get the privilege of closing their eyes and having it go away.”

In health care especially, there is no room for discrimination. African-Americans experience significant disparities with chronic conditions, access to care, preventative screenings, and mental health, according to the U.S. Department of Health and Human Services. The death rate for African-Americans is generally higher than whites for heart diseases, stroke, cancer, asthma, influenza and pneumonia, diabetes, HIV/AIDS, and homicide.

And it’s work that matters to Black doctors like Larry Martin.  “I work and live in this community, and I do feel it,” he says.  “I can honestly say it has just felt different in the U.S. over the last couple of weeks.  You’re starting to see a lot more people fight for change.  To have an organization set aside time to honor a movement like this, it empowers me and gives me hope about where we’re going in the future.”