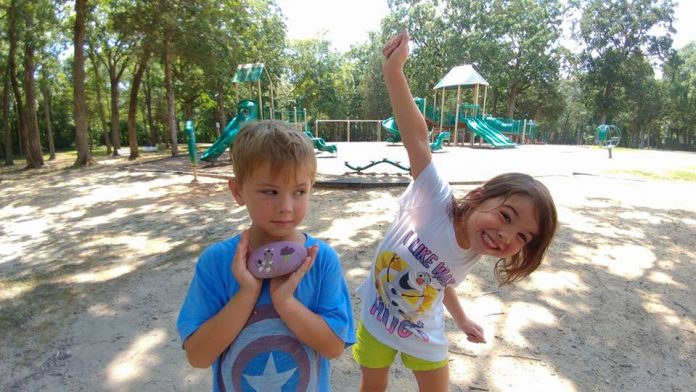 Colorful, painted rocks have been popping up all over Mint Hill this summer!

The rocks are an offshoot of the Kindness Rocks Project founded by Megan Murphy in Cape Cod. Recalling how she would look for “signs” on her morning walk on the beach during stressful and difficult times, Murphy began painting rocks with inspirational messages and dropping a few at a time for others to find.

Murphy couldn’t have predicted how her simple hobby would grow. When Murphy began receiving messages from strangers who found her rocks about how much their inspirational messages meant to them, Murphy stepped up her efforts. She created the Kindness Rocks web site, promoted her efforts via social media and encouraged others to join her.

Visitors to Cape Cod began photographing the rocks and sharing them on social media. Some picked up rocks and brought them home where they began similar projects in their own communities. In a short time, the Kindness Rocks Project has grown into a worldwide grassroots movement with rocks appearing all over the globe.

Melissa decided to bring Kindness Rocks to Mint Hill. She collected some flat-surfaced rocks from a local trail and began painting them with her 5-year-old nephew, writing “Mint Hill Rocks” on the back. Melissa also started the Facebook page “Mint Hill Rocks,” and on June 29, she posted that she would hide her first rocks the following day.

Mint Hill Rocks quickly gained momentum. Over the next few weeks, Melissa frequently posted pictures of new rocks and hints about where she was hiding them. Moreover, she encouraged her followers to post pictures of themselves with the rocks they found before re-hiding them. As of mid-July, her page had almost 170 followers.

Mint Hill Mom Danielle Anson first learned about Mint Hill Rocks on the original “What’s Up Mint Hill?” Facebook page. She showed her son a picture of a rock hidden at Harris Teeter, but he was unable to find it when he went to the store. Anson followed the Mint Hill Rocks page, and when she saw more rocks had been hidden at Town Hall, she and her son “ran to Town Hall and pretty much gathered all of them!” After that, they were hooked. “I have added about twenty friends to the Mint Hill Rocks page since,” says Anson. “I’ve been talking about it to everyone! Even my out-of-state friends and family have gained interest in this effort.”

More people are getting involved as painters as well. “I’m not the only artist,” says Melissa. “There are some really, really beautiful ones.” Anson hosted a painting party for her son Reven and his friends last week. “We collected rocks from our yard and bought some at Michael’s, and we now gathered friends and are hiding and painting them,” says Anson. “ROCKS ROCK!” exclaimed Reven about painting his own rocks.

Mint Hill businesses are starting to get involved as well. Rumor has it that two special sets of rocks will be hiding at the Food Truck Rally at Barking Duck on August 4. Duck-themed rocks will be tagged with #seizetheduck to promote Barking Duck Brewing Company, who hosts the food truck rally. “M” Rocks will be placed at the rally by AR Brothers Entertainment who does Gypsy fortune tents at local businesses and storytelling at regional schools and events as the Knights of M (which stands for “Many Things”). Finders who track down a Knight of M get a story about the rock. Check out AR Brothers’ Facebook page for clues to the Knights’ identities.

The original goals of the Kindness Rocks Project are simple: to “inspire others through randomly placed rocks along the way” and to “recruit every person who stumbles upon it to join in the pursuit of inspiring others through random acts of kindness.” “Essentially, it’s just about making someone smile,” says Melissa of the Mint Hill Rocks movement, “just to uplift someone who’s having a hard day, or even a really good day!”

Want to get involved in Mint Hill Rocks? It’s easy! First, make sure you’re following the Mint Hill Rocks Facebook page so you’re privy to hints about new rocks appearing around town. If you find a rock, take a photo and post it! “It really is a great feeling when you see somebody’s smiling face with a rock you painted, and you know you put that smile there,” says Melissa. You can also paint your own rocks and hide them around town! Just make sure you ask permission before hiding them at businesses and avoid “rocking” places where lawn care crews might stumble over your creations.