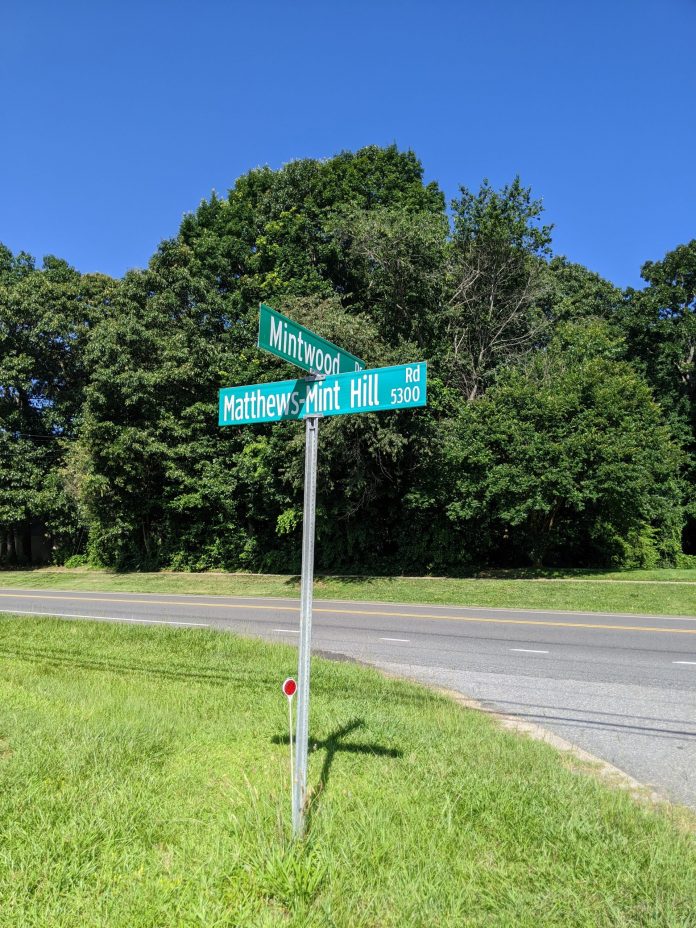 MINT HILL, NC – Doug Johnson, a Mint Hill resident for forty-five years, is on a mission to keep the streets of his beloved neighborhood and town clean and free of litter.

Johnson has called Mintwood Drive his home since he moved there at the age of five in 1975. “I’ve always kept everything pretty neat since I was young, maybe ten years old,” says Johnson.  “Now, being fifty, it’s inherent in me; I’m just motivated to make sure things are clean and everything looks nice and beautiful.”

Nowadays for Johnson, that means picking up litter wherever he sees it, especially on the streets of his Mintwood neighborhood.  At least every week or two, he walks the streets where he lives and makes sure they are free of the trash.  He’s been at it so long that he’s known by all the neighbors who are happy to have Johnson keeping an eye on their street.

“If he sees a piece of trash in the road, he just about has a fit!” says mom Ruth Johnson.  “He keeps Mintwood Drive shiny and sparkling!”

Johnson focuses his efforts on his own neighborhood, but litter is a problem that plagues all the streets of Mint Hill.  “Litter seems to be one of those menace issues that society has not been able to curb,” says Town Manager Steve Frey.  “Despite children being taught at an early age to not litter and signs warning of large fines for littering, it still happens everywhere. Sometimes it’s caused by negligence (i.e. trash blowing out of a vehicle), but oftentimes it’s intentional.”

Frey and Johnson agree that it’s a problem that has worsened as Mint Hill has grown and expanded.  “In the past, it didn’t seem like such a big deal,” says Johnson, “but now there are more and more people, so there’s more and more garbage around – more traffic, more people, and they don’t seem to care as much.”

That, to Johnson, is the heart of the problem.  “Mint Hill has changed,” he continues.  “Mint Hill used to be such a small, close-knit community, and it was easy to keep it clean.  Many people cared about it.”

By picking up trash and litter, Johnson hopes not only to make the streets a little cleaner but also to set a good example for others, to inspire them – especially young people – to do the same.  “I would hope that it would be a good example to the younger generation, the next generation, to see me,” says Johnson, “that it’s OK to pick up trash and internalize that they can do the same thing, they can help keep our community clean.”

As Mint Hill continues to grow – and perhaps, especially in this strange era of social distancing – it can be easy to become compartmentalized, to fail to get to know one another, or take pride in one’s neighborhood.  In a time where we are increasingly isolated, increasingly wrapped up in our own affairs, Johnson’s willingness to work in a simple yet impactful way to make our town better sets him apart.

“What struck me most about Doug’s story was his willingness to do what he can to help his community instead of waiting for someone else to do it,” says Frey.  “In his case, he cleans up roadside litter in his neighborhood. That may sound like an insignificant action, but his effort not only helps keep his neighborhood clean, it keeps that clutter out of the sight of others and improves their quality of life. His small contribution compounds exponentially without him knowing it.”

That’s exactly what Johnson wants: in a small way, to make a difference, and encourage others to do the same.  “Mint Hill is such a beautiful town,” says Johnson.  “I hope the Mint Hill community will take pride in our town and make it one of the best towns to live in and by keeping it clean and respecting each other.”

In addition to picking up trash on your own streets and around town, there are several other ways to keep our streets clean: