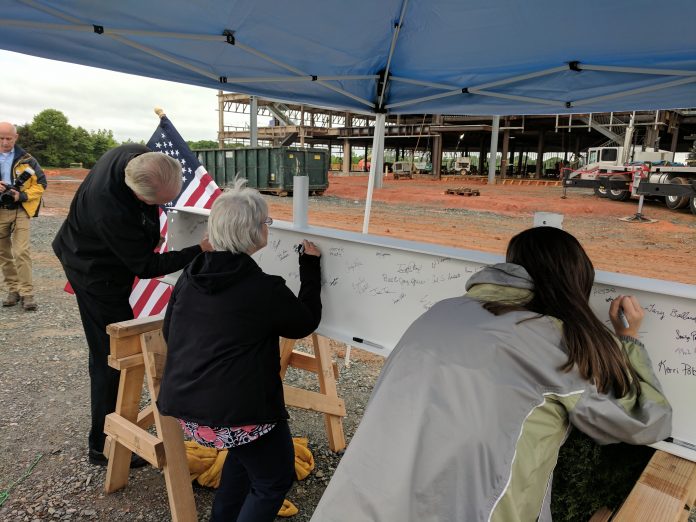 On April 25, Mint Hill Medical Center celebrated a milestone in its construction process with a “Topping Out” Ceremony.

The two-hour gathering celebrated a milestone in the construction of the new medical center: the near-completion of framing. “We’re very excited,” said administrator Joy Greear. “The steel is almost complete, and once that’s complete, we’ll start wrapping the building and enclosing it. Our goal is to have the building enclosed by the end of the year, and then we’ll be able to be working on the inside.”

In the world of construction, a “topping out” or “topping off” ceremony is traditionally held when the last beam is hoisted and placed atop a structure during construction. “Topping out” has its roots in a Scandinavian religious rite that called for placing a tree on top of a new building in order to pacify the tree-dwelling spirits who were displaced during the building’s construction. Flags or streamers were often tied to the tree, and workers were often treated to a toast or meal following the placement of the tree. Today in the United States, it is a common practice for the final beam of a skyscraper to be painted white and signed by all the workers involved in the project before placing it on the building.

Tuesday’s ceremony at Mint Hill Medical Center incorporated many of these traditions. People involved in all aspects of the project signed a white beam reserved for the top of the structure: Novant Health leaders, workers from Vannoy Construction, architects who played a role in the project, local officials and even community members excited to see the project come to fruition.

For the purposes of the ceremony, the beam was hoisted high into the air and placed atop the framed structure. However, it’s final resting place is yet to be determined. “We’ll find the right spot,” said Greear. “We want to make sure this piece is visible in the actual hospital.”

Following the raising of the beam, Novant Health leaders expressed congratulations to the construction crew for reaching this point in the process. “It’s a milestone from a construction standpoint,” said Greear. “We’re really here celebrating Vannoy Construction and the progress they’ve made at this point.” Following the ceremony, attendees enjoyed a lunch catered by Matthews’ eatery Mac’s Speed Shop.

Mint Hill Medical Center, located at the Albemarle Road exit off 485, will include both physicians’ offices and a hospital facility. It’s planned services include 38 general hospital rooms, 24-hour emergency care, labor and delivery maternity rooms, an intensive care unit, surgical operating rooms, an on-site pharmacy, and imaging services such as mammography, ultrasound, CT scans, mobile MRI and cardiac catheterization. Novant Health hopes to open the facility in the fall of 2018.