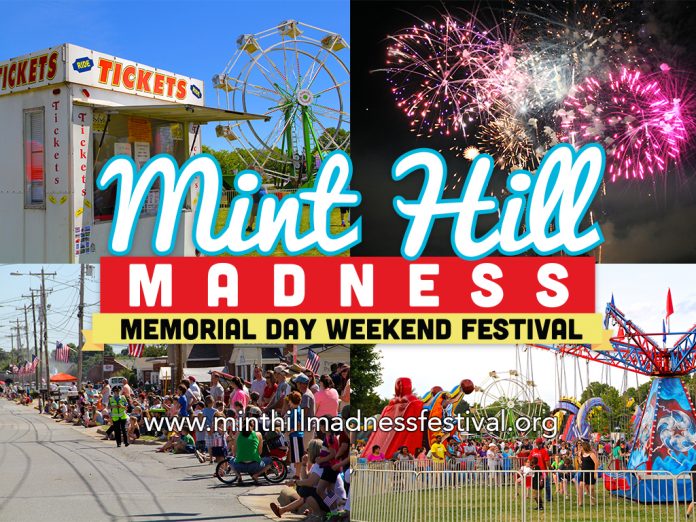 Mint Hill Madness is just around the corner! The signature festival is in its 34th year and will be held May 26 – 28. Admission to the festival is free; the cost of the carnival rides varies.  Friday is wristband night with all you can ride for one fee. The weekend will feature carnival rides, amazing food, live music, Knockerball, a loyal group of local craft, business, and non-profit vendors with a variety of wares, an All-American parade, and a spectacular fireworks show. This family-friendly event has something for everyone and expects a crowd of 20,000 to 30,000 over the three-day weekend.

The Madness begins on Friday at 4:00 p.m. at Mint Hill Veterans Memorial Park with rides and vendors. At 7:30 p.m., the Novant Health Main Stage will welcome Da Throwback Band with great songs from the 70’s and 80’s era of R&B, Top 40, and Old School Funk. Rides will be open until 11:00.

The Battle of Mint Hill will be held from 9:00 a.m. until 6:00 p.m. at the tennis courts at the park. Sponsored by Publix, athletes will gather in a partner competition to battle it out. They will complete a series of workouts throughout the day to determine the fittest team! Knockerball, a game where competitors are surrounded by a giant bubble and do their best to stay on their feet, will be held at the lower soccer field.  Last bubble standing is the winner!

After you’ve mastered Knockerball, be sure and check out the NFL Punt, Pass&Kick Competition at 1:00 p.m., also at the lower soccer field. This is a national skills competition for boys and girls between the ages of 6 and 15 who compete against each other in punting, passing and kicking in an engaging form.  For the past two years, competitors from Mint Hill have advanced on to the next several rounds, having the opportunity to be on the field with the Carolina Panthers on game day.  You can pre-register or sign up the day of the event.  Registration is free!

The Ben Gatlin Band, a powerhouse rockin’ band, will be onstage at 2:00 on Saturday, followed by Blue Monday at 4:30.  Blue Monday is a tribute to the MTV generation, playing MTV Classics of the 80’s and 90’s.

“Satisfaction/The International Rolling Stones Show” will grace the Novant Health Main Stage at 8:30 p.m. on Saturday night.  This Billboard & Pollstar-listed show is now celebrating its 15th anniversary in production with over 2,500 performances listed to its credit. The likes of Mick Jagger, Keith Richards, and cast bring a colorful performance to 50 years of classic hits.

The festival will culminate in a Fireworks Extravaganza at 9:00 p.m. on Saturday night, a spectacular, one-of-a-kind fireworks show that is the largest in the Carolinas. The budget for the show has been increased, and this year’s show promises to be better than ever! Bring your lawn chairs, beach towels, and blankets, and get there one or two hours early for the best seats and parking. While the fireworks will be visible from all areas of the park, a little birdie told me the best place to watch the show is from either of the soccer fields.

Kids of all ages will be delighted that rides, vendors, and Knockerball will be open from 12:00 p.m. – 6:00 p.m. for fun and shopping on Sunday afternoon.  Sponsored by Novant Health, this year’s Mint Hill Madness is one weekend you don’t want to miss! For a real-time schedule of events, download the Madness 2017 Guidebook at https://guidebook.com/g/madness2017.

Mint Hill Events, Inc. and the Town of Mint Hill would like to thank all our sponsors.  We would not be able to do it without them.