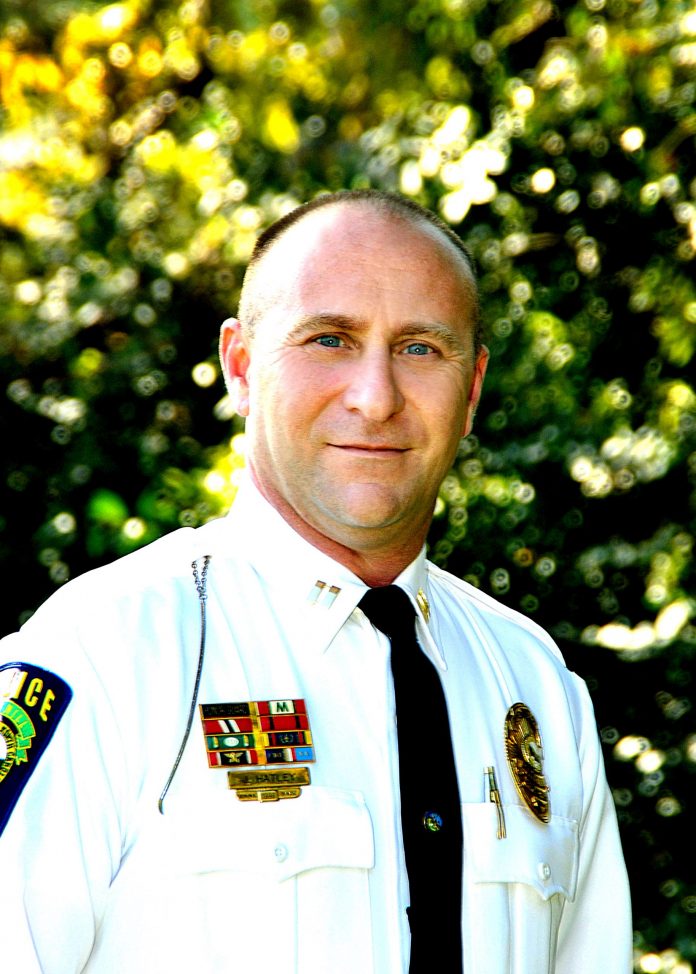 Similar to outgoing Chief Ledford, Chief Hatley worked construction with his father before signing on with the military at the age of seventeen.  When Hatley returned from his military service, he enrolled at his local community college simultaneously studying criminal justice and autobody repair.  Upon nearing completion of criminal justice, Hatley enrolled in Basic Law Enforcement Training (BLET) and completed his associates degree in criminal justice while also graduating from BLET in 1998.

Hatley began his career in law enforcement with the Stanly County Sheriff’s office, where he worked construction on his off days to make ends meet.  Hatley progressed through the ranks at the Sheriff’s office, eventually taking over as Captain, Patrol Division.  In 2003, a friend of Hatley’s said he was going to work for Mint Hill.  “What the heck is Mint Hill?”  responded Hatley.  “Never even heard of it.”

But three years later when the Stanly County Sheriff failed to get re-elected, Hatley found himself inquiring whether that little town outside of Charlotte had any openings.  “I basically left the Sheriff’s office one day and came here the next,” says Hatley, who arrived on the scene in Mint Hill in 2006, “and the rest is history!”  Hatley started off in patrol and served in varying and progressively higher supervisory roles, eventually rising to his current position as the Captain, Support Services Commander responsible for leading the investigations, evidence, and records division.

In Mint Hill, a missing piece of Hatley’s life was born December 2007.  In February 2008, while still trying to figure out raising an infant, it dawned on him that he would one day be having conversations with his son about going to college.  “I didn’t want any of our conversations to ever be, ‘Well, Dad, you didn’t go to college,’” recalls Hatley, and so his own quest for higher learner was re-ignited.  Hatley completed a Bachelor in Criminal Justice at Western Carolina University and then completed a Master’s in Security Studies with a concentration in Homeland Security from East Carolina University.  In 2016, Hatley was blessed to attend the prestigious FBI National Academy, for which less than 1% of all law enforcement are ever chosen.  Hatley recently enrolled in a Doctor of Strategic Leadership program and hopes to complete within the next 5 years.

When Hatley looks back on the time he has spent in Mint Hill so far, what sticks out is the support the police department receives from the Town and its citizens.  “There’s not a holiday that goes by that we’re not having a plethora of food!” says Hatley.  “The citizens are always thanking us.  We have a great Mayor, Town Council, Town Manager – and the officers are what really make this department.  They have a drive and passion for doing what’s right, and that’s what’s made my time here phenomenal.  Travelling the nation, talking to other agencies – they have a hard time.  They just don’t have the support we have here.”

In the years leading up to Chief Ledford’s inevitable retirement, Town Manager Brian Welch asked Ledford to identify an internal candidate whom he could mentor as his potential successor.  Captain Hatley was identified early on by Chief Ledford as a highly qualified candidate for promotion.  Welch, too, was impressed by Hatley’s numerous qualifications, and with the unequivocal support of not only Chief Ledford but also all of the Command Staff’s personnel, Welch made the decision to promote Captain Hatley.

When asked how it felt to be chosen as Mint Hill’s third Chief of Police, Hatley responded, “One word: elated.  I feel like it’s the culmination of where I’ve been leading myself over the years,” continues Hatley.  As Chief, Hatley hopes to continue Ledford’s legacy of community engagement.  “He’s done a great job and laid the groundwork,” says Hatley, “but we can’t rest on our laurels and not try to continue to that next level.  That’s why what I plan on doing is continuing the community engagement we have and looking for new ways to engage.”

Ultimately, Hatley hopes to address and erase the preconceived notions of the police and break down barriers that exist between the police force and civilians not just in Mint Hill but across the nation.  “I’ve said this years prior to all this coming to a head if you will: we are our own worst enemies,” says Hatley.  “We fail to communicate what we do.  Everything we do in law enforcement, there’s a reason behind it. But we don’t take that extra few seconds to explain why we’re going to do XYZ.  Just because I’m interacting with you on a negative aspect, a traffic stop or you’ve done something wrong, you’re still human.”

“We have to be mindful that this may be your first interaction with law enforcement ever, and how we treat you in that moment of interaction, that’s going to be how you view all law enforcement across the nation,” continues Hatley.  “Unfortunately, back to the communication aspect, that officer may have just left a homicide or a suicide, and they may not have the best attitude or mindset. We don’t give our officers probably enough time to decompress what they just left to come interact with you.”

Captain Hatley will officially take the reins of the Mint Hill PD on January 1, 2021.  The Mint Hill joins the town in congratulating him on his new role!