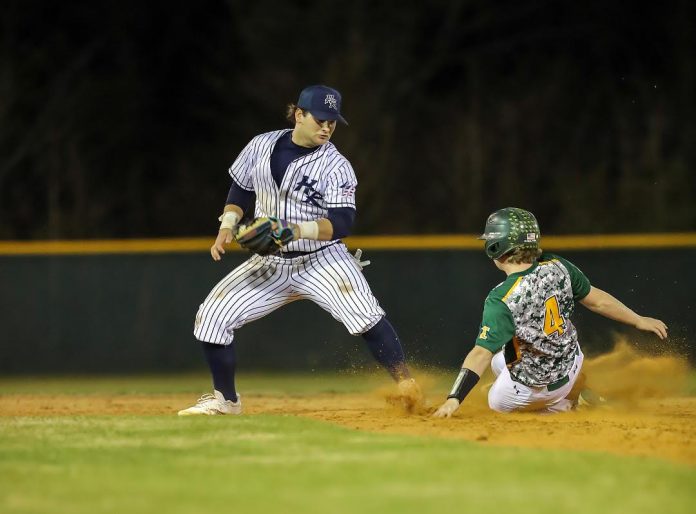 On Friday night the Independence Patriots’ baseball team traveled to Harrisburg for a conference game against the Hickory Ridge Ragin’ Bulls. This could be the last high school game for the 2019-2020 school year.

On Thursday, March 12, 2020, the North Carolina High School Athletic Association announced that due to the coronavirus threat it was suspending all spring sports statewide starting at 11:59 p.m., March 13 and resuming April 6.  This includes all workouts, skill development, practices, and contests.  The Board of Directors will assess this situation regularly over the next few weeks.

But if this was the last game of the season, the Patriots went out like champs.  This team played the most spirited, gutty, no quit baseball I have seen in a while.

Hickory Ridge jumped out to a 2-0 lead in the first inning and scored two more runs in the bottom of the fifth inning to take a 4-0 lead over the Patriots.

At the top of the sixth inning, the Bulls’ pitcher gave the Patriots four free passes.  Indy’s Bryson Jusko, Brandon Moser, and Lucas Turner were all hit by a pitch.  Wilson Lokrer drew a  walk before the Bulls made a pitching change.  But it came a little late as Jusko, Moser, and Lokrer scored for the Patriots to make the score 4-3 with the Bulls leading.

At the bottom of the sixth, the Bulls went down in order.  Indy’s pitcher Carson Gesing struck out the first two Bulls’ batters and the last batter grounded to shortstop Bryson Jusko who made the throw to first baseman Tyson Clawson for the final out.

Heading into the seventh and supposedly the last inning, the Patriots trailed by one run 4-3.  Indy’s first baseman Tyson Clawson started the come back with a single to left field.  Bryson Jusko drew a walk and Brandon Moser reached on an error by the Bulls’ first baseman.  A Bulls’ pickoff play at first base scored Clawson from third.  Wilson Lokrer reached on an infield hit to score Jusko which gave the Patriots the lead 5-4 heading into the bottom half of the seventh inning.

In the bottom half of the inning,  Micheal Rawlings replaced pitcher Carson Gesing who was approaching the 105 pitch limit.

The Bulls opened with a double to center field and took third base on a wild pitch.  With two Bulls’ runners on base and one out.  Hickory Ridge’s junior James Belles hit a sacrifice fly to the right field to score the Bulls’ runner to tie the score 5-5 taking the game into extra innings.

At the top of the eighth innings, the Patriots took control and put the game away.  Indy scored two runs on base hits by Lucas Turner, Tyson Clawson, Bryson Jusko, and Carson Gesing.

On the defensive side of the inning, Lucas Turner took the mound and gave up one walk and had one strikeout as the Patriots went 2-0 in the conference play with a 7-5 victory.

This will be the last high school sports story until April 6.  The NCHSAA board of directors will make the decision on whether to continue the suspension or to restart the season.

I have got to give a major shout out to the Hickory Ridge baseball team.  Not knowing if this would be the last game or not, the Bulls baseball team had the public address announcer to recognize the Patriots seniors before and after the game.  That was a lot of class.  Thanks, Bulls.

You will be notified as soon as we get a press release from the NCHSAA.