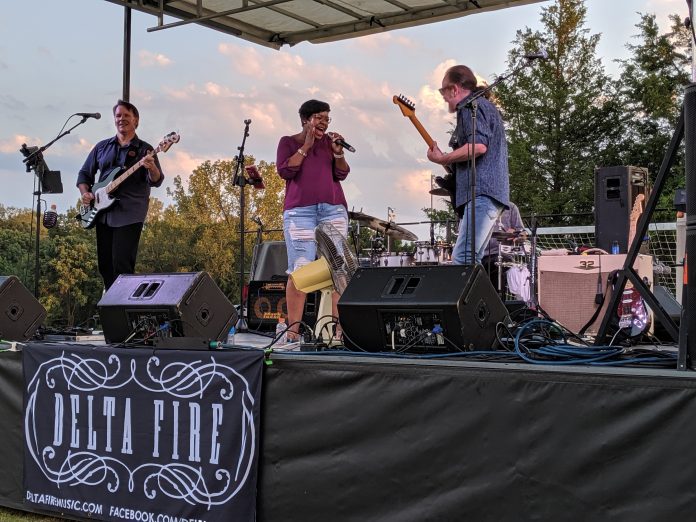 Hosted by the Town of Mint Hill, the evening’s main event was a concert by Charlotte-based cover band Delta Fire.  The band rocked the park with their signature mix of soul, rock, pop and country hits from the 70s through today.

The band itself was a big draw for many park patrons who were set up on the lawn over a half hour before the music began.  “She can SING!” said Joanna, referring to lead singer Shemaine Pickens. Joanna was one of a large group seated front and center who had seen Delta Fire perform at Moochies Tavern in July.

“We heard this band at Moochies a few months back, and they were great!” agreed Jennifer.  “We packed some picnic stuff and came on out to enjoy the night.” Jennifer and her husband, who remember bringing their kids to Movies on the Lawn at the old Town Hall, were excited to see a concert like this in Mint Hill.

Delta Fire entertained the crowd with everything from classic 70s hits like “Brandy” and “Proud Mary” to more modern favorites like “Rebel Just for Kicks” and “Cake by the Ocean.”  Their 80s covers like Chaka Khan’s “I Feel For You,” Rick Springfield’s “Jessie’s Girl” and Queen’s “Under Pressure” were crowd pleasers. They also featured a medley of songs from artists like Prince, George Michael, Michael Jackson and David Bowie, a tribute to great musical artists we’ve lost in the past few years.

Like this summer’s other Family Fun Nights, the Delta Fire concert was held at Veteran’s Park – not in front of Town Hall.  What began as a temporary change of location to accommodate construction on the fountain turned out to be a big improvement with more room for parking, kids and pets.

“The first one that we had to move down here because of the fountain construction went so well!” said Town Manager Sheryl Smith, who had originally planned to move Family Fun Nights back to Town Hall when the fountain was completed.  “Having them at the park just gives us a big space. I mean, look at these kids running around,” she continued, gesturing to kids cartwheeling and playing ball. “They can’t do that at Town Hall. It gives you a chance to get your kids tired out!”

Although the Delta Fire concert concludes this summer’s series of Family Fun Nights, the fun isn’t over yet!  On Saturday, October 5, the Town of Mint Hill in conjunction with the Arts and Science Council and Atrium Health will host the Annual Tina Ross Afternoon in the Park in front of Town Hall.  Formerly known as “Sunday Afternoon in the Park,” the afternoon of artistic displays, performances and vendors now honors the late commissioner Tina Ross and her love for both the arts and the Town of Mint Hill.

On October 26, the Fall Harvest Festival will be another night of family fun with a pumpkin patch, scarecrow decorating and pumpkin bowling along with face painting, inflatables, family games and food.

“It’s a beautiful night, and a wonderful conclusion to our series of Family Fun Nights,” concluded Smith as the sun set over the park.  “These nights in the park have been a wonderful way to enjoy the summer and bring the community together.”