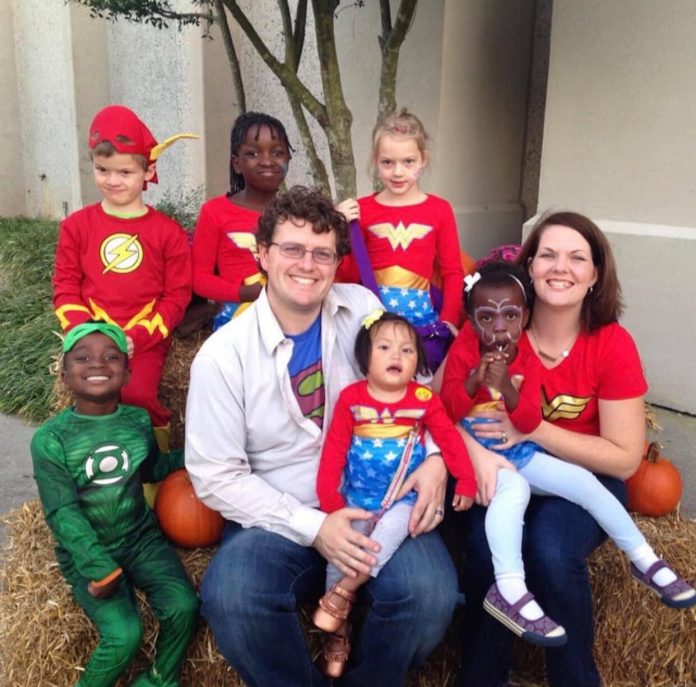 On July 18, an unthinkable tragedy occurred on Oak Island.  Thirty-seven year old father of six Lee Dingle was playing in the ocean with his children when an intense wave knocked him to the ocean floor, breaking his neck in two places and causing complete paralysis.  Dingle passed away the following day as a result of his injuries.

Most recently a resident of Raleigh, Lee moved to Mint Hill in elementary school with his younger sister Laurie and his parents, Bill and Brigitte Dingle, who still live in Mint Hill today.  Lee attended Lebanon Road Elementary School and Northeast Middle School. In ninth grade, Lee began the International Baccalaureate Program at Independence High School, an academically rigorous program that strives to develop students who will build a better world through intercultural understanding and respect.

At Independence, Lee began what would be a lifelong tradition of service and selflessness.  As an IB student, Lee completed fifty hours of service to his school community, fifty additional hours of service to the Mint Hill community, and fifty hours of leadership training.  He played with the “Incomparable” Independence Marching Band, ran track and cross country, was active in his church, and enjoyed being a member of the High Adventure Team of the Boy Scouts of America.

Lee continued this tradition of service to those in need as a civil engineering major at NC State University.  Lee used his growing knowledge of engineering to help those in need as a volunteer member of the North Carolina Emergency Management, Urban Search and Rescue Team, which helps communities that have been overwhelmed by the effects of natural or manmade disasters who have exhausted local and neighboring jurisdiction’s resources.

While at NC State, Lee took part in numerous mission trips, including traveling to Ecuador twice to build homes for those in need.  Lee’s receipt of the General Hugh Shelton Award for Leadership speaks to his effort to live the center’s mission: “To inspire, educate, and develop values-based leaders committed to personal integrity, professional ethics, and selfless service.”

“Lee was a cherished member of the Wolfpack family and left a positive legacy here on campus,” writes NC State Chancellor W. Randolph Woodson.  “His hard work in starting Dance Marathon at NC State has resulted in a significant amount of money being raised for our local children’s hospitals through a highly anticipated event each year among our students. This is an incredible legacy that has impacted countless lives in so many ways. Lee’s absence will be felt by those who knew him, but his memory will continue to inspire all whose lives he touched.”

Lee’s drive to improve the world around him continued long after his graduation from NC State in 2004.  After having two biological children, Lee and his wife Shannon made the decision to adopt a Taiwanese girl with cerebral palsy.  Her adoption journey was chronicled by The Archibald Project, an organization whose mission is to combat and end the global orphan crisis.  The Dingles went on to adopt three more children, siblings from Uganda.

The work and sacrifice of adding four adopted children to one’s family may seem incomprehensible to many people, but for Lee, it was no burden.  “Helping and caring for children has always been an integral part of Lee’s life,” says Lee’s mother Brigitte simply.

Lee’s legacy of service to those in need continues even after his death.  In a final act of selflessness that Lee himself would have doubtlessly appreciated, his organs have been donated to help the 115,000 people – 3,000 in NC alone – awaiting organ transplants.

“As soon as Lee got his first drivers license, he made the decision to be an organ donor,” says his mother.  “His selfless decision saved the lives of four, and helped fifty-five others. Of course, Lee would prefer to be with his children and family right now, but being of service to others was paramount in his life. It was the kind of man Lee was.”

After Lee’s death, Governor Roy Cooper marked his ten years’ service to the state as a Collapse Rescue Engineer by presenting his family with an NC flag.  The flag was flown over the State Capitol Building on July 25.

In spite of the tragic circumstances of his passing, Lee leaves behind an admirable legacy of service.  “As his mother, I believe that Lee would most want to be remembered as a truly good person who set an example for his children and others around him,” says Brigitte.

Perhaps Lee said it best himself through the words his mother remembers him saying almost daily: “Just be a good human.”

The PT Center is here for your whole well being