MINT HILL, NC – The historic Bain Academy demolition project began recently, and the building will no longer be standing in Mint Hill across from Philadelphia Presbyterian Church. The school was originally founded by John Bain in 1889 with his own funds and stood proudly for over 131 years.  A civic-minded bachelor who had a mission to build an excellent school, Bain inherited a 700-acre family farm, located off Lawyer’s Road. When the land was secured across the road from the church, he proceeded with the construction, then donated it back to the church.

In many ways, it is a sad occasion.  However, we should be celebrating the school for decades of serving thousands of Mint Hill area students. Throughout the years, the academy attracted students outside of Mint Hill who boarded with local families. The student body consisted of 180 students enrolled during the first year of existence and beyond. The academy offered a well-rounded and balanced curriculum for their students. The faculty taught the basics of reading, writing, and arithmetic, but also offered more advanced courses in Latin, oratory, physics, and rhetoric. The boys had the added responsibility of chopping wood, building fires, and carrying water.

The teaching staff was filled with all college graduates. This was not a requirement back in 1889; however, it assisted in attracting students to the school and helped to establish a solid reputation for educational excellence. The school thrived and grew in stature locally and afar throughout the years.

The original academy had a devastating fire in 1903; however, the community rebuilt the structure and studies continued without any major delays or interruption. In 1924, Philadelphia Church passed the baton over to Mecklenburg County to operate, but the school continued to receive funding from the John Bain Trust until 1935. The school received a new face when renowned local architect Louis Asbury designed an expansion of the building on the property. The Bain High School became only one of two high schools in the county providing college-level preparation for students in North Carolina. Its graduates had a long history of success in various fields of endeavor from business, education, government, law, military, and medicine. Others became ministers, farmers, and homemakers.

To save the school, the Historic Bain Committee was established under the leadership of the late Tina Ross. The committee was able to raise money for the restoration; however, there were several lost opportunities, especially in trying to secure financial backing from various government grants. Another potential savior was the Charlotte Academy of Music who was very interested in the building; however, Charlotte Mecklenburg Schools did not permit a building inspection, and this opportunity quickly fell apart.

In 2018, the restoration committee in conjunction with the Town of Mint Hill decided to float a bond proposal to the citizens of Mint Hill in the November election. The $3 million Public Facility Bond that would have renovated the academy was voted down by 540 votes.

The Public Facility Bond proposal included the use of a Cultural Arts Center at the building site by restoring the historic Bain Academy. Under the proposal, the building and auditorium would be renovated and would have been used for theater productions, an art gallery, events, fashion shows, craft shows, seminars, weddings, and reunions.

The good news is Charlotte Mecklenburg Schools gave bricks from the building to Historic Bain Restoration for the construction of a fitting memorial at the site, pending approval by CMS and the Town of Mint Hill.  The Committee will be responsible for the design and construction of the memorial. It will tell the story of the history behind the Bain Academy since its historic beginnings going back to 1889.

“When the late Sue Lemmond Helms designed the town seal, she drew attention to the two most historically significant symbols of Mint Hill, Historic Bain Academy, and Philadelphia Church,” said former Committee Chair Carol Timblin.  “I hope the seal never changes because it will continue to secure the legacy of John Bain and what he envisioned for future generations of Mint Hill families. As one of my fellow committee members summed it up so well, “Historic Bain Academy was more than a brick building. It represented community, family, and love.”

Denise Fohr, current Committee Chair stated, “The Historic Bain Committee worked very hard over the last 7-8 years. Fundraising and educational events occurred often and were met with a lot of passion and commitment by a dedicated group of people who wanted to save the history of the building and provide Mint Hill a community center. While we are disappointed the building has been demolished, the committee will now focus on creating a suitable memorial using materials from the building to permanently mark the historical importance for Mint Hill.”

John Bain passed away on March 26, 1897.  He is buried in the West Cemetery where a large pillar marks his final resting place, and a window in the old sanctuary honors his memory. His dream was realized; historically his legacy will forever be as an individual who made a huge difference in our community for well over a century. 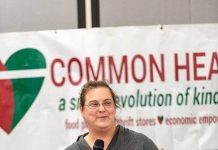