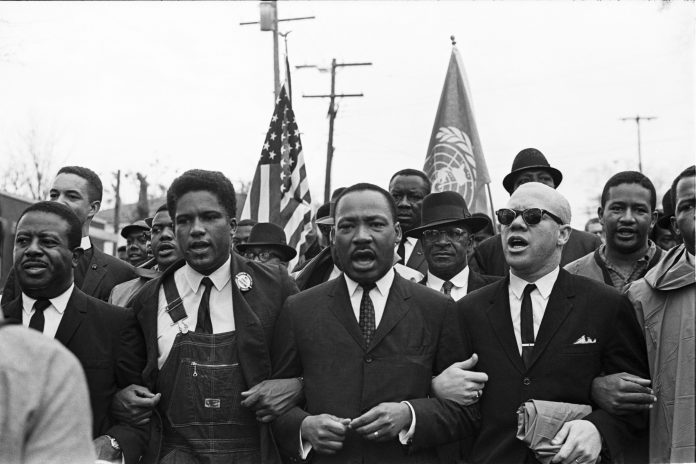 He stood to Reverend King’s left, took a deep breath, and locked arms with his friend and mentor as they readied themselves to march to further the cause of civil rights.  The unidentified “white” man wore sunglasses because his sensitive blue eyes strained at the brightness of the day.  Only he isn’t unidentified.  And he isn’t white.

The man in the photo is Reverend Jesse Lee Douglas, Sr., an African-American with albinism who fought for civil rights for blacks in the South.  “I wasn’t noticed as much as people of color were,” Douglas says.  “Even as president of the Montgomery Improvement Association (MIA), they didn’t think I was a black man.  They thought I was a white sympathizer.”

Some have mistaken the photo of him and Dr. Martin Luther King, Jr. as being from the Selma to Montgomery March of 1965.  But Douglas says this isn’t the case.  “That photo was taken at a march that we had on the county courthouse in Montgomery, Alabama.  Students of Alabama State University (Alabama State College at the time) were demonstrating downtown, and Sheriff Butler had deputies run the students down with horses to curtail the demonstrations,” Douglas recalls.  “I called Dr. King, and he came to Montgomery to assist us.  We marched to where Sheriff Butler’s office was, and we met with him from about 1:00 – 5:00 in the afternoon.  It rained cats and dogs.  People stayed outside with umbrellas until we came out and told them there was an agreement that something like that would never happen again.”

Douglas and many others were committed to furthering civil rights for reasons that young people might not be able to imagine today.  “Before that time, everything in the U.S. was off limits to blacks,” Douglas explains.  Places like train and bus stations would have separate restrooms for whites.  African-Americans weren’t allowed to eat in restaurants or stay in hotels.  When the Public Accommodations Bill of the Civil Rights Act of 1964 was passed, Douglas and Dr. King were among the first to see if hotels would respect the law and allow them to rent a room.  They traveled Birmingham to see for themselves.

“When we were coming back from Birmingham, we stopped at one of the antebellum hotels built by black slaves.  No black people had ever stayed there, and we stopped the day after the public accommodations bill had passed.” Douglas says.  “A member of the American Nazi Party had followed us [to the hotel].  When Dr. King went up to register, he worked his way up there and punched Dr. King in the face as hard as he could.”  Regardless, Dr. King’s passion for the movement never overcame his desire towards nonviolence.  Douglas recalls, “If you didn’t pledge yourself to nonviolence – sign a commitment form that you would not rebel or retaliate against the things directed to you – you could not participate.”

Though he himself did not march, Reverend Douglas helped with the logistics of the 18-day Selma to Montgomery March and prepared to greet marchers on their arrival to Montgomery.  “Dr. King made a national appeal for people to come to Selma to assist them in this march to Montgomery.  The MIA had to form carpools, [and arrange] housing and food – all of that had to be negotiated by the people and pastors in Montgomery.  Selma didn’t just happen in a vacuum.  We helped make it happen.”

Part of the work Reverend Douglas did came on the closing night of the march.  Celebrities and entertainers converged on Montgomery to welcome the thousands of marchers who arrived in the pouring rain.  “People from Montgomery were wonderful in providing assistance with vehicles, housing, feeding.  A lot of people slept on benches in churches.  People came from all walks of life,” Douglas recounts.

Douglas and SCLC Board Members along with Harry Belafonte had secured several big entertainment names such as Sammy Davis Jr. to perform for the crowd.  It had been a long march, but according to Douglas, only 300 marchers had been allowed to march on the highway.  The rest had to walk on the side of the road by order of Judge Frank M. Johnson, Jr.  “Lyndon Johnson sent troops to supervise the whole thing and set up a hospital to take care of any injuries,” says Douglas.

Douglas remembers one person who responded to Dr. King’s call to help with the Selma to Montgomery March.  Viola Liuzzo came from Michigan to help drive people who had participated in the march as part of the MIA transportation committee.  She was assassinated on the road after her attackers saw that she was a white woman riding in the same car as an African-American.   Her murder still weighs heavy on Douglas’s mind.

At 87, Douglas feels he has lived a full life.  “I believe that everything I have done with my life has been within the will of God,” Douglas says.  “I’m just glad that I was sensitive enough to realize that these were my callings.  I entered the ministry in my early 20’s and pastored for 53 years full time in service to people while working in the Civil Rights Movement.”  Even now, he can be found giving guest lectures at schools across the country about the Movement and his experiences in Alabama.

Douglas continues to have hope for race relations.  “There’s only one God and one human race,” the reverend says.  “And He loves all of His creation equally.  He gives us talents and abilities to use for all of our brothers.  We’ve come quite a ways, but there is still a long ways to go.”