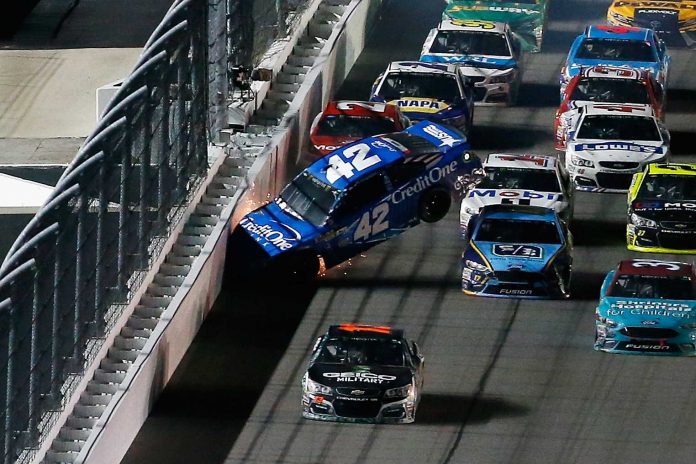 With a race producing 14 caution flags that developed into the victors second series win this season in his 158th career start was accomplished in exciting fashion.  Two months ago Stenhouse won at Talladega which established himself as a restrictor-plate wizard with his second win after breaking away from the pack in the three lap overtime.

Stenhouse in his No. 17 Roush Fenway Racing Ford lined up behind race leader David Ragan for a restart on Lap 162, a caution flag after a backstretch crash involving Jamie McMurray, Denny Hamlin and Erik Jones slowed down the action for the 14th time sent the race into overtime.

Immediately Ragan jumped out to a two-car length lead quickly after the restart, however, Stenhouse surged past him near the end of the backstretch to protect the top position the remainder of the race.  Clint Bowyer ran a smart race and charged into the second positon at the finish line, beating third place finisher Paul Menard to the checkered flag.  Michael McDowell in the No.95 Chevrolet was fourth and Ryan Newman in the No. 31 Chevy fifth.

Apparently, Stenhouse is superstitious and persuaded team owner Jack Roush into letting him keep the winning car No. 17 from the Talladega victory for the Daytona race even though Roush built another racing car that was just as fast.

Meanwhile, multiple wrecks crippled or eliminated at least a dozen contenders, the most notable was Dale Earnhardt Jr.’s final run at Daytona International Speedway in the No. 88 Hendrick Motorsports Chevrolet who was sitting in the pole position.

On Lap 52 Earnhardt’s right front tire was losing air but he was trapped in the outside lane with no place to maneuver.  Inadvertent contact by Paul Menard’s No. 27 of the Chevrolet pulled the No. 88 into the outside wall near Turn 1, destroying the top third of the car number on the right side of the vehicle.

Earnhardt would lose two laps on pit road, however, he would rebound back into the lead lap.  After seventh place finisher Brendan Gaughan scraped the wall on Lap 90, Earnhardt restarted 31st, and gallantly moved himself up to sixth place before Kevin Harvick blew a tire and would spin in front of Earnhardt in Turn 2 on Lap 106 to end his day.  Also, impacted by the wreck was Stage 1 winner Brad Keselowski.  Stage 2 winner Matt Kenseth earned his second stage win this season.

Next Saturday, July 8th at 7:30 pm Monster Energy NASCAR Cup Series continues in Kentucky for the Quaker State 400 Presented by Advance Auto Parts a 267 lap race running 400.5 miles.  All the racing action can be viewed on NBCSN.