Athlete Of The Week:

The senior running back had himself a solid performance on Friday night under the lights at East Mecklenburg. He had 6 carries for a total of 95 yards and two touchdowns. He averaged 15.8 per carry, his longest run from scrimmage was 37 yards, and he provided some effective blocking when needed.

Solomon has accumulated 368 yards in 8 games this season, he has had 58 carries and  averages 6.3 yards per carry. His longest run from scrimmage is 37 yards, has averaged 46 yards per game, and scored 7 rushing touchdowns to lead the team.

Another senior who had 8 rushes for 106 yards on Friday night. He averaged 13.3 yards per carry with his longest running play a nifty 37 yarder. He has had a solid season making a significant contribution. McIntyre has totaled 412 yards on 42 carries averaging 9.8 yards per carry, averages 51.5 yards per game, and has 4 rushing touchdowns. His longest run from scrimmage is a 56 yarder.

The upcoming sophomore had 2 receptions for 81 yards giving him an average of 40.5 yards per reception. His longest was a 51 yard TD catch and he scored two touchdowns in the football game.

The junior TE had 2 catches for 78 yards and two touchdowns. His longest was a 58 yard pass reception for a TD. He averaged 39.0 yards per catch. On the season Brown has 8 pass receptions for 250 yards and 5 TD’s.

The Patriots QB completed 11 passes on 17 attempts for 260 yards. He averaged 23.6 yards per completion with 4 touchdowns and 2 interceptions for a QB rating of 108.1. His longest pass completion was for 58 yards.

The Independence defense has been solid all season long. The defensive leaders should be recognized. The stats below does not include Friday nights game as they were not available. 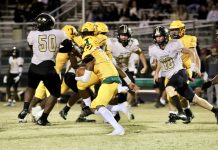