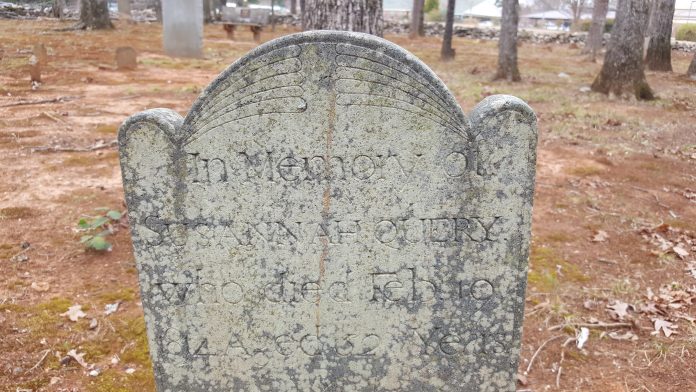 One Thursday a dozen years ago the Historic Cemeteries crew (George Timblin, Charlie Burdick, Harry Hood, Scot Treadwell, and Bill Hawkins) discovered a tombstone under several layers of dirt while working at the Cemetery at the Second Site (a Philadelphia Church cemetery next to Queens Grant School). With considerable effort, they brought it to the surface and wiped off the dirt, revealing the name of the person buried there: “Susannah Query, February 19, 1814, 52.” No birth date was included on the marker, but her birth date was figured to be 1762, before or after her family moved to the Clear Creek area.

Genealogist Scot Treadwell put all his research skills to work and found no links to Susannah. A recent review of records, accessed at www.Ancestry.com, has not yielded any more clues. However, North Carolina Marriage Records, 1841-2011, includes information on several members of the Query family. Robert Query married Elizabeth McGinnis in 1843 and Margaret Caldwell in 1851. The record also show marriages linking the Query family and the Helms, Sandford, Spencer, Blair, Cochran, Black, and Harris families. Was Susannah a member of one of these families?

A case might be made for connecting Susannah to John Query, a Mecklenburg Declaration signer, who died in 1797, and/or Robert Query, who died August 25, 1827, at the age of 64 years (born 1763). No marker has been found for John Query, but he is believed to be buried near Robert Query in the Rocky Springs Burial Ground at the church’s first site. Were Robert and Susannah children of John Query since they were born a year apart? (John Query was born in Scotland and migrated to North Carolina by way of Pennsylvania.) Did Susannah marry into the Query family when she became of age? If she had children, who were they? Why was she buried at the second site, not the first?

The real identity of Susannah Query remains a mystery, as does the identity of so many people buried at each of the historic cemeteries. However, their important roles in Mint Hill’s history cannot be denied.

A feature on Joseph V. “Buzz” Hamilton, who served as mayor of Mint Hill from 1991 until 1995, will appear in the next column.