After Mint Hill opened its first park, received its first ambulance, installed its first traffic light, and elected its second mayor and board of commissioners, everyone wondered what would happen next? After thinking about an official seal, the town leaders decided to sponsor a competition in hopes the result would be an outstanding design.

It didn’t take long for Mrs. Minnie Lemmond, who had taught at Bain School for more than 40 years, to send an application to her daughter Sue. At the time, Sue was living with her husband Jerry and their two young children, Robin and Brian, in Wyckoff, NJ.

After all the entries for the town seal competition had been submitted, the judges chose Sue’s entry! The circular design with a white background featured a circle of green mint leaves with five gold nuggets at the bottom, a band of gold that said “Town of Mint Hill,” and a small ribbon giving 1750 as the date of settlement and 1971 as the date of incorporation. Black line drawings of Philadelphia Presbyterian Church and Bain Academy filled the inside of the circle.

Sue and Jerry drove from New Jersey to Mint Hill to claim the prize – a $25 savings certificate – presented by Mayor Troy Pollard. It is probably safe to say that Minnie Lemmond exuded a little pride at the ceremony!

The Town of Matthews was not to be outdone when it came to an official seal, so their town leaders staged a competition. Sue’s entry won! Her circular design featured a sketch of the Matthews Depot, a steam engine, and several tree stumps in the foreground, with “Town of Matthews” and the founding date – 1879 — on the outside. The colors were yellow, blue, green, brown, and black on a white background.

When the leaders of Wyckoff heard about Sue’s winning designs, they also set up a competition for a town seal for the Bicentennial. Guess who won? Sue. The blue-yellow-black design on a white background featured the historic Zabriskie House in the middle, encircled by the words “Township of Wyckoff, New Jersey, 1926,” with “Bicentennial 1776-1976” on the outer rim.

Born to Dexter and Minnie Lemmond on Feb. 28, 1943, Sue grew up on the family farm on Albemarle Road, graduated from Bain School and East Mecklenburg High School, and earned an art degree from Women’s College in Greensboro. A beautiful blonde girl, Sue was chosen as the first Miss Mint Hill at the VFW, Homecoming Queen at East Mecklenburg High School, and Carousel Princess.

Sue and Jerry had their first date in Chapel Hill and were married a few years later at Philadelphia Church. Jerry landed a job with Dupont right out of college and began his climb up the corporate ladder.

After the Helms family moved to Atlanta, Sue and Jerry joined the Friendship Force, a global organization that fosters peace through cultural exchanges. During their travels around the world Sue amassed a collection of more than 10,000 items, which she later used in art camps at the International House in Charlotte. The collection was exhibited in Matthews and Huntersville a few years ago.

Eventually, Sue and Jerry returned to the family farm near Mint Hill, where they welcomed many friends, their children, and seven grandchildren. During their tenure as co-presidents of the Mint Hill Historical Society (2002-2005), the Carl J. McEwen Historic Village expanded. The parlor in the administrative office honors the Helms. Sue’s untimely death on July 3, 2012, was a great loss to the family and to the community. 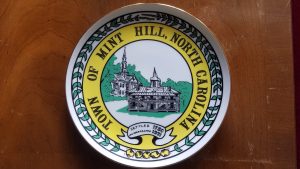 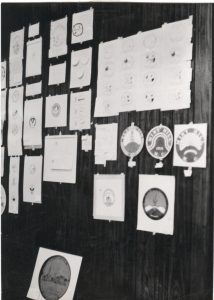