On March 1, Total Being Yoga celebrated the one-year anniversary of opening its doors in Mint Hill.

The yoga studio located above DA Salon has come a long way from where it began.  Owner Mian Rex began Total Being Yoga in April of 2016, recruiting instructors to offer classes in a 200-square foot, 8-person renovated space in her own basement.  A year out from opening the 1200-square foot studio in downtown Mint Hill, Rex has seen 700 faces walk through the door, welcoming men women and families from age ten to age eighty-three to the mat.
Over the past year, Rex has immersed herself fully in the Mint Hill community, collecting donations and contributing services to an impressive variety of local charitable causes.  They have “Filled the Barrel” for organizations like Girls on the Run, Urban Ministry Center and A Servant’s Heart. They have hosted workshops to benefit the Movember Foundation and the Leukemia and Lymphoma Society, for which they raised $630.00 in February.  Currently in the works is a Yen class to raise money for the Charlie’s Heart Foundation. Rex prioritizes involvement with youth- and sports-oriented organizations, contributing toward and promoting Fairview Elementary School’s Treasure Cards and sponsoring organizations like Butler High School and the Matthews Athletic and Recreation Association.

TBY also partners with several local businesses to offer discounts to customers.  Yogis who attend class at TBY enjoy half off the hourly childcare rate at A Parent’s Time Out for the hour they are in class.  Free range eggs from Lou’s Free Range Chicken Farm are delivered fresh to the studio every Wednesday. Teachers and first responders both receive discounts on 5- and 10-class passes.  TBY also partners with neighbor Snap Fitness to offer discounts to those who use both facilities. They are the only yoga studio in Charlotte to offer Silver Sneakers, a program for seniors with certain health insurance plans that allows them to attend the 12:00 Wednesday Gentle Hatha Meditation class free of charge.

For Rex, giving back is what owning a business is all about.  “That’s what I want to do this year. I hope to connect more,” says Rex, who hopes to continue marketing by “locking arms in the community.”  “It’s rewarding when you do a function and you raise $630.00. It’s amazing.”

In the coming year, Rex hopes to continue to grow her membership while connecting with the community in meaningful ways.  Rex is preparing to launch “Friends of TBY,” a private facebook group for those who come to the studio to connect and motivate one another.  She’s also getting ready to revamp TBY’s website to include a “TBY Gives Back” section highlighting their charitable initiatives. As she welcomes more men and children to the studio, she hopes to soon offer a family plan.  Down the line, she’d love to feature local artists in the stairwell outside her studio and offer fun and different events like a “Black Light Yoga” workshop.

“It’s just been such a success in the community, and I’m beyond thankful to have locked arms with the instructors that are like family,” says Rex, reflecting on her first year in business.  “Just to see all the yogis walk in the door and see them smile, and when they walk out they’re in that yoga high. I just never thought it would be so much fun.”

On Friday, March 23, from 6:00 – 8:00 pm, Total Being Yoga will host a “First Birthday Bash” at neighboring Vintner’s Hill Bean to Vine Cafe. Everyone is welcome to meet and mingle with other yogis and aspiring yogis in the community. “I’ve always said what brings people to the mat is the person they meet next to them,” says Rex. 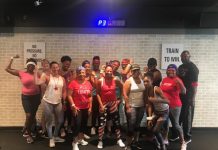 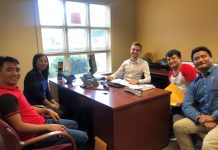 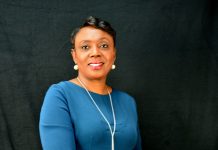 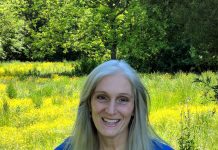 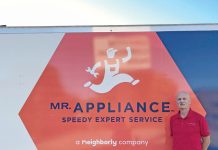 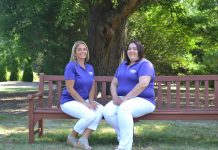